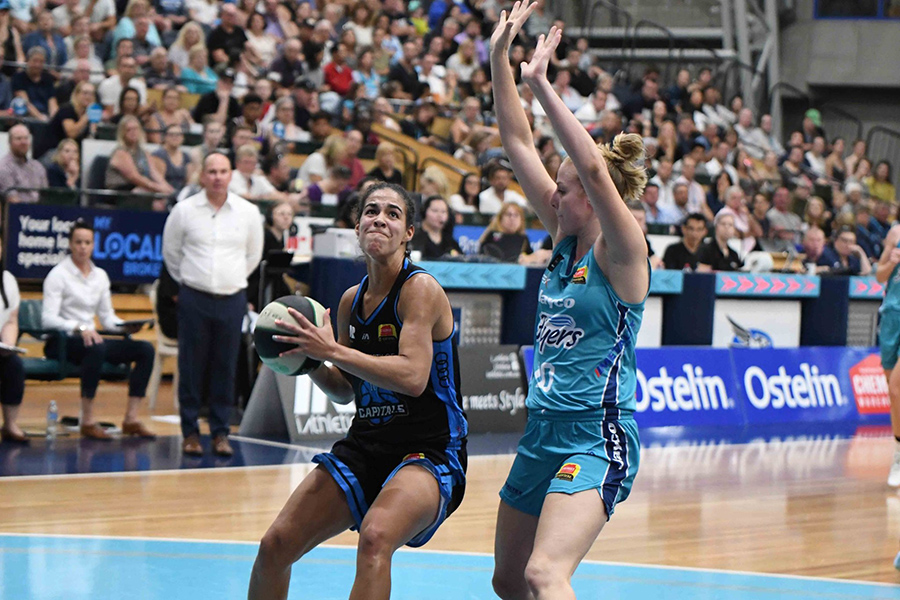 Tale Of The Tape: Looking Back On The Flyers-Capitals Season Series

Game One of the WNBL Grand Final series tips off tomorrow and our Southside Flyers will have their hands full throughout, as they take on the only team that beat them more than once this season, the University of Canberra Capitals. Here’s an in-depth breakdown on how the Flyers were taken down in their regular season matchups and what they should key in on to turn it around when it matter most:

Southside has had an extremely difficult time putting the ball in the hoop vs the Capitals, scoring just 72, 70, and 74 points in each of their 3 matchups, which happens to be the Flyers’ three lowest scoring totals in the regular season. They are scoring on offense at just a 0.81 points per possession rate (PPP) vs Canberra. The Flyers can typically rely on their 3PT shooting, with four of their starters shooting 35% or better from deep. However, Canberra has almost completely taken this away from Southside, holding them to 24% from deep and a dismal 20.5% on spot up 3PT shots.

Formidable as it might be, the Capital’s defense is not impenetrable. When starting guards Leilani Mitchell and Bec Cole are able to get themselves into the paint, the Flyers have flourished. Between the 2 guards, the Flyers are scoring 1.17 PPP when they get off a shot in the paint. Despite her smaller stature, Mitchell is producing 1.27 PPP on shots set up by her driving the ball into the paint.

Southside will no doubt be focusing on creative ways to open up driving lanes for their perimeter players. The Flyers have found success pushing the pace, scoring 1.16 PPP in transition, and 1.17 PPP with 18 or more seconds left on the shot clock. With less defenders back to block their way, Mitchell and Cole should be able to get going with a few easy layups in transition.

Another way to open up the paint is through the pick and roll. However, the Flyers have not been efficient in the season series vs the Capitals. They have particularly struggled to score against a switch, producing only 0.35 PPP. To counter this, Southside should look to put whoever Marianna Tolo is guarding into a pick and roll. She does not typically switch onto quick guards, typically forcing Canberra into a hedge approach. Mitchell and Cole have had much more success against this look, scoring 1.19 PPP.

Defending as a Team

Overall, the Flyers’ defense has been strong against Canberra this season, holding them to 0.87 PPP. However, they have struggled in a few areas. Southside has been torched when they try to defend the Capitals one-on-one. In isolation plays, Canberra has produced 1.39 PPP with a flurry of crossovers, euro-steps, and up & unders. The Flyers need to be prepared to collapse the paint as soon as they see an isolation being set up to try to make the shot as difficult as possible.

Similarly to the Capitals, the Flyers have had great success switching on the pick and roll, and didn’t fare as well relying on a hedge. The key difference for Southside is they have defensive player of the year Mercedes Russell at center who is capable of switching out onto the perimeter. The Flyers’ should be looking to switch almost all pick and rolls, where they have held Canberra to just 1 score in 10 attempts.

Above all this, the number one key to stopping the Capitals is to crash the defensive glass. In Southside’s 2 losses to Canberra, they were out rebounded on the offensive glass 21-41. By contrast, they won the offensive rebound battle in their victory 15-8. The Flyers need to make sure they are sticking to the fundamentals and box out as a team to prevent any easy looks down low. If all else fails, the Flyers may look to play Anneli Maley more, who increases the team’s defense rebounding rate by almost 7% when she takes the floor vs Canberra.

The biggest news of the week for the Flyers was that extremely versatile wing and team captain Jenna O’Hea has been cleared to play in the Grand Final series. She has been a difference maker for Southside all season, and particularly against Canberra. On the offensive end she does it all. In her 2 games against the Capitals, O’Hea has produced 1.25 PPP as the pick and roll ball handler, 1.20 PPP on shots from the paint, and 1.00 PPP on post ups.

With Jenna on the floor, the Flyers have scored 0.90 PPP and just 0.70 without. Her versatility has had an almost equal effect on the defensive end, limiting Canberra to 0.80 PPP with O’Hea on the floor and 0.95 PPP without.