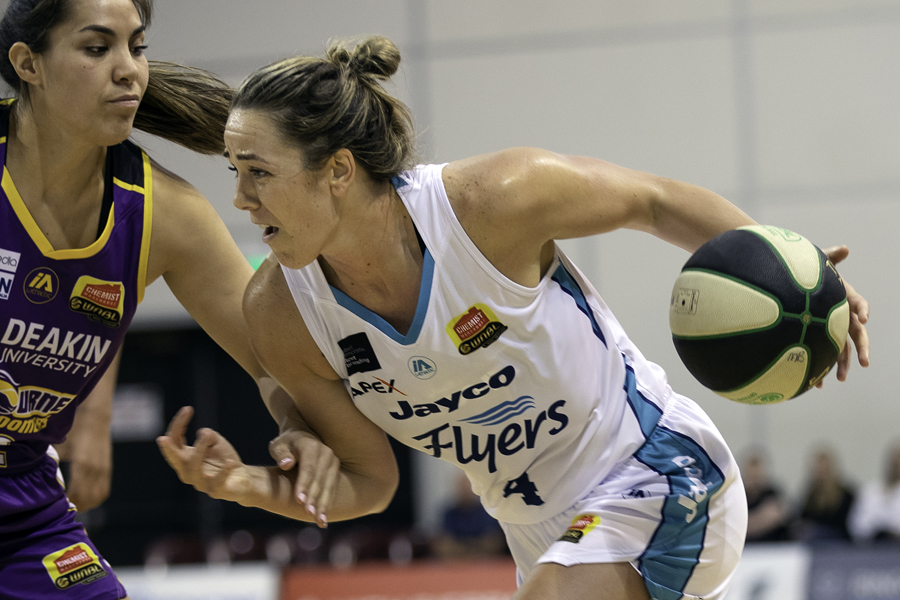 Unassailable Will – Jenna O’Hea’s Journey Back

Days after hearing her season was over, Southside Flyers Star Jenna O’Hea looked on from the sidelines as WNBL MVP Kia Nurse led the UC Capitals to victory over her beloved team.

It was the Flyers second consecutive game without O’Hea and their first at home. The night marked Southside’s Cheryl Chambers’ 250th game as a WNBL head coach.

Minutes after the final buzzer, as both teams had begun to warm down and fans piled out of Dandenong Stadium, O’Hea sat alone.

Fresh out of surgery and with a cast encasing her wrist, understandably, the Southside star looked dejected.

In a night that meant so much to her coach, her team and her fans, she was unable to join her teammates on the court – this clearly hurt.

“I think I’m still adjusting, the news is still quite fresh,” O’Hea said postgame against the Capitals.

“It’s hard not being able to contribute on the court…it’s just a learning curve I guess.”

The Opals star wasn’t the only one suffering, her Flyers teammates were also navigating how to best deal with the injury.

“She’s [O’Hea] a big piece of the puzzle,” Southside guard Aimie Clydesdale said. “It’s up to everybody to fill in little pieces to try and fill the void that she’s left.”

It was Clydesdale who found herself starting in O’Hea’s absence.

“I haven’t really thought about trying to fill Jenna’s shoes whatsoever, I think that’s impossible…I don’t think anyone can,” she said.

However, like any great team, Southside proved to have the depth and talent to survive and thrive in the absence of its captain. In the final weeks of the WNBL season, the Flyers sputtered at times, but ultimately they rallied. Consecutive victories to finish the season amounted to a minor premiership and the number one seed in the playoffs.

Southside’s first finals series against the Adelaide Lightning was short and sharp, a 2-0 sweep for the leagues number one. Throughout all of those victories, Jenna O’Hea was on the bench supporting her teammates in every way she could.

“Obviously it’s a little bit harder from the sidelines,” O’Hea said. “I’m more of an ‘I’ll show you how to do it’ type of leader and ‘follow my lead’ but I’ve been trying to be vocal on the bench, trying to help my teammates as much as I can.

“Just try and keep everyone together and keep it really positive.”

As someone who prefers to lead by example as opposed to instruction, the change took some getting used to, but nothing can stop a champion like Jenna, they’re a different breed.

The Southside Flyers are a team built around a mix of veterans and youth – yin and yang. The veterans teach and guide, while the youth learn and develop. Flyers youngster Anneli Maley spoke on the impact of the teams veterans – including O’Hea – on her.

“Growing up I watched these women play, it’s mostly an honour to be out on the floor with them,” Maley said. “They just bring another level of basketball smarts and basketball IQ.

“Players like Jenna, just being on the floor with them and watching them play, I learn so much.”

The impact speaks for itself.

“I got good news from the surgeon on Monday, he said the bone was healing really well. I practiced yesterday…and I have two more practices before the grand final,” O’Hea said on the radio show.

Against all the odds, Jenna O’Hea returned to action in last Sunday’s Game 1 of the WNBL Grand Finals series. After coming off the bench early in the first quarter it appeared as if Jenna had barely missed a week of action, picking up 14 points, 6 rebounds and 2-3 3PT shots in a stunning display despite the Flyers Game 1 loss. To be back on the court after her injury was surprising; to play so well was astonishing.

Things like injuries are out of an athlete’s control, you can do all the prevention possible and sometimes you’re just unlucky.

The unpredictability of injuries makes them difficult to deal with. One moment you’re the captain of the WNBL’s top team, then suddenly your season is over. What makes a champion is how you respond to this adversity: will it break you or make you?

The Southside captain has proven yet again that she is special, her positive attitude and persistence to never give up has been rewarded with the opportunity to play basketball on the WNBL’s biggest stage. No matter the outcome on Wednesday – win, lose or draw – Jenna O’Hea has won her battle and in doing so, she has inspired so many; you won’t find a better role model.

Fans, teammates and opponents alike can look at her persistence in recovery as inspiration to achieve the unachievable. Young boys and girls can look up at O’Hea’s example and see that no matter where you go in life, sport related or not, positivity and hard work will always be rewarded eventually.

Appreciate your captain Flyers Family – champions like her don’t come around very often.