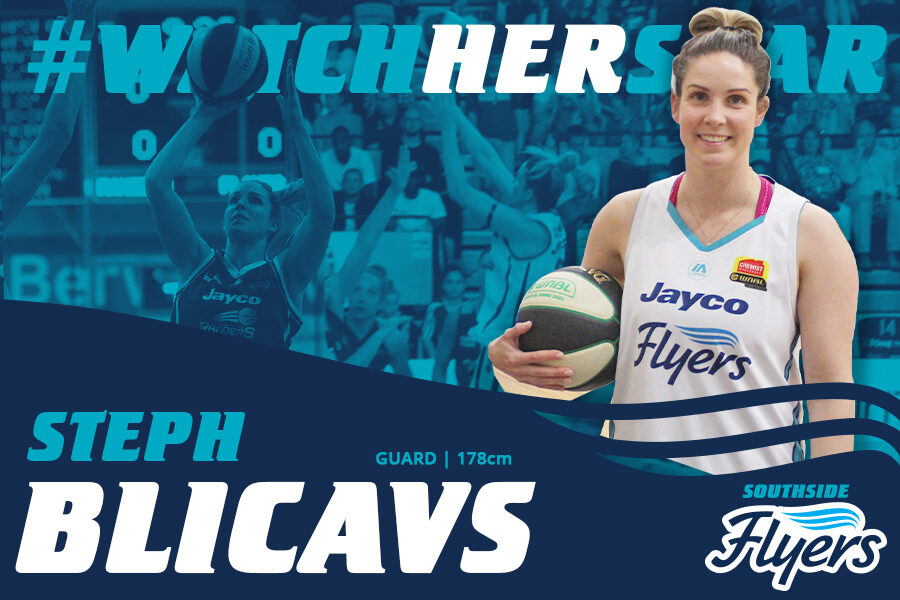 WELCOME TO THE FLYERS AND BACK TO THE WNBL OFFICIALLY

Steph Blicavs has confirmed her decision to join Southside Flyers for the upcoming season, returning to where her WNBL career commenced in 2006.

Speaking with sister-in-law Sara Blicavs on “Sayin’ it with Sara” on Flyers Instagram live on Sunday morning Steph said she was excited about resuming her career with the Flyers, admitting she loved watching the team last season.

“When I decided I wanted to return the decision on who to play with was really easy, in fact I didn’t have to make a decision, it was that simple,” Steph said.

“I went to a few games last season and everything I saw and everything Kris (husband who was part of the strength and conditioning team) and Sara said about the Flyers was just so positive. Such a professional organisation with great people, not just the players but throughout the entire club. And of course Cheryl Chambers is very special, she has been super helpful, not just a great coach, she understands about being a Mum, so it was an easy fit,” added Steph.

Coach Cheryl Chambers was delighted when Steph confirmed her interest in playing for the Flyers.

“Steph had been around the team a little last season and we certainly provided an open invitation for her to join the Flyers if she decided to resume her career. There was no hesitation when she said she was keen. We have all seen how good a player she is and importantly she is a quality person,” said Cheryl.

“I am  looking forward to what she will bring to the team, especially her ability to light up the score board and I am really excited she wants to return to the WNBL with the Flyers,” added Cheryl.

A Dandenong junior basketballer, Steph has won two WNBL championships during her 302 game career – with Dandenong Rangers in 2012 and with Townsville Fire in 2015. Her WNBL career started at Dandenong Rangers and she has also played with the AIS, Townsville Fire and Adelaide Lightning. Steph was a member of the Opals Gold Medal team at the 2018 Commonwealth Games. She missed last season after giving birth to a son, Arlo in October last year.