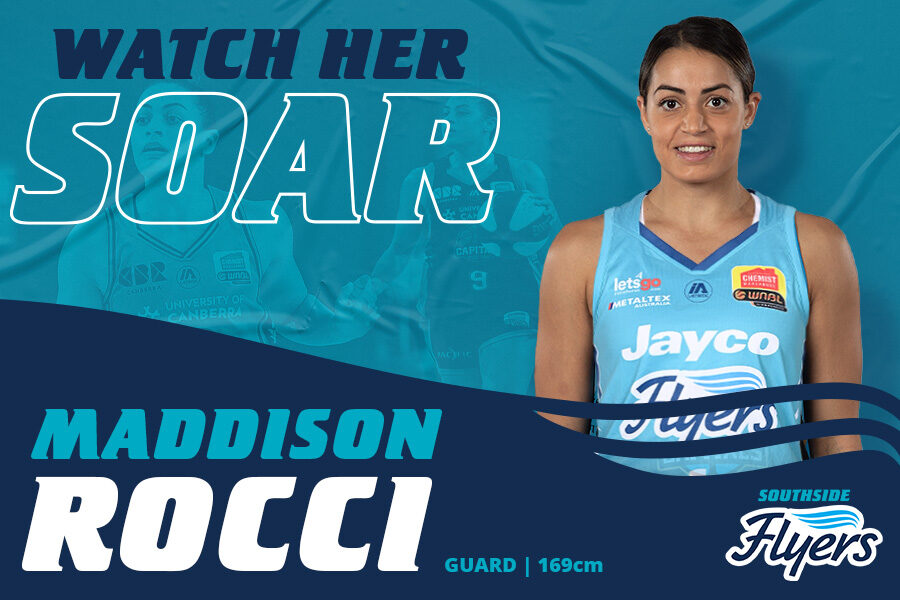 Welcome to the Flyers Maddison Rocci

Southside Flyers are thrilled to welcome Maddison Rocci to the team.

Maddison is a dual WNBL Championship player with Canberra Capitals and won their Most Valuable Player Award for the 2020 season when she averaged a career high 16 points per game and was named in the All WNBL Second Team.

Considered one of Australia’s best young players, Rocci turned 23 on June 1st and her 2020 season was rewarded when she was added to the Australian Opals training squad earlier this year. She was top 10 in scoring, assists and steals during the 2020 WNBL season, confirming her status as one of the most improved players in the WNBL over the last two seasons.

Joining the Flyers will be a return to Melbourne where her junior basketball career started.

“I am really excited to be coming home to Melbourne after being away for six years, and the chance to join the Flyers has added to the excitement. Having played against Southside the last two seasons I have seen first-hand how talented the team is, how hard they work, and also how much fun they all appear to have playing together.”

“To be able to come home and join this team and to be able to play in front of my family is what I am really looking forward to,” said Maddison.

Maddison will not only be returning home to Melbourne to continue her WNBL career she will be joining her sister-in-law, Aimie Clydesdale, at the Flyers.

Flyers coach Cheryl Chambers is thrilled to welcome Rocci to the team and is looking forward to what she will bring to the Flyers on and off the court.

“Adding a quality young player, who has already played in two WNBL Championship teams is a huge bonus for our team. We have all seen her offensive ability, particularly her ability to ‘get to the rack’, which will add to our firepower. She has real speed, very quick hands and reads the play really well and she is also a very tough defensive player.

An exciting player for our team and a quality person, so a wonderful addition,” Cheryl said.

Rocci grew up in Werribee and lived around the corner from Werribee Stadium, although her early basketball was played in the backyard with her siblings (three brothers and a sister), before the competitive career started with the Werribee Devils when she was 11 years of age.

Her career highlights, include the two WNBL Championships, a Gold Medal with the Australian Under 18 Oceania Championships in 2016 and representing Australia in Under 17 and Under 19 World Championships.

Welcome to the Flyers Maddison Rocci.