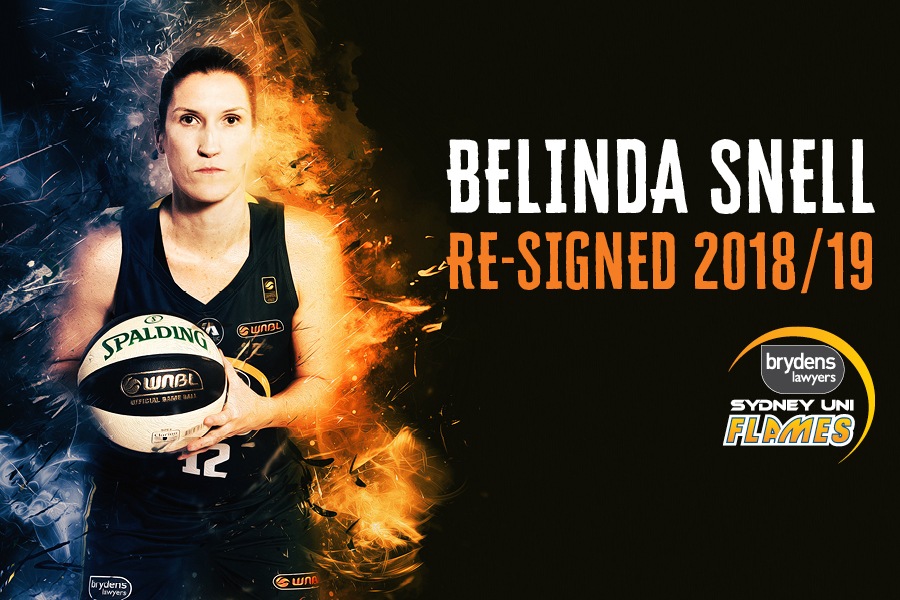 The Brydens Sydney Uni Flames are thrilled to announce the return of Captain, Belinda Snell, for the 2018/19 WNBL season.

In her third stint at the club, Snell returned to Sydney in 2016. She is a highly valued member of the Flames, bringing a wealth of experience and talent to the group.

“I’m really happy to be back with the Flames for next season. I couldn’t see myself finishing my career anywhere else but Sydney,” Snell said.

“I’m looking forward to working with such a great group of girls again and hopefully we can go one step better than last year.”

Coach, Cheryl Chambers, is equally pleased to keep Snell in the Flames line-up.

“We are rapt to sign Snelly for this season. Her experience and productivity is priceless and her drive to be successful has never been stronger,” Chambers added.

A stalwart of the Australian and international basketball circuit, Snell’s credentials are up there with the best.

Celebrating a huge milestone last season, Snell played her 300th WNBL game. The Flames captain has been a true leader both on and off the court, continuing to produce great performances in the 2017/18 season, averaging 13.1 points per game, 6 rebounds per game and finished second in the league in assists, averaging 5.4 per contest.

She was also named WNBL Player of the week in Round 8 and was named in the Team of the week three times (Round 1, Round 8, Round 10).

Snell was recently named in the Australian Opals team alongside fellow 2017/18 Flames team mate,  Katie-Rae Ebzery and will compete at the 2018 Commonwealth Games on the Gold Coast in April.

She is also currently sharing her vast knowledge with the younger players coming through, appointed as head coach of the Sydney Uni Sparks in their second season in the South East Australian Basketball League (SEABL).