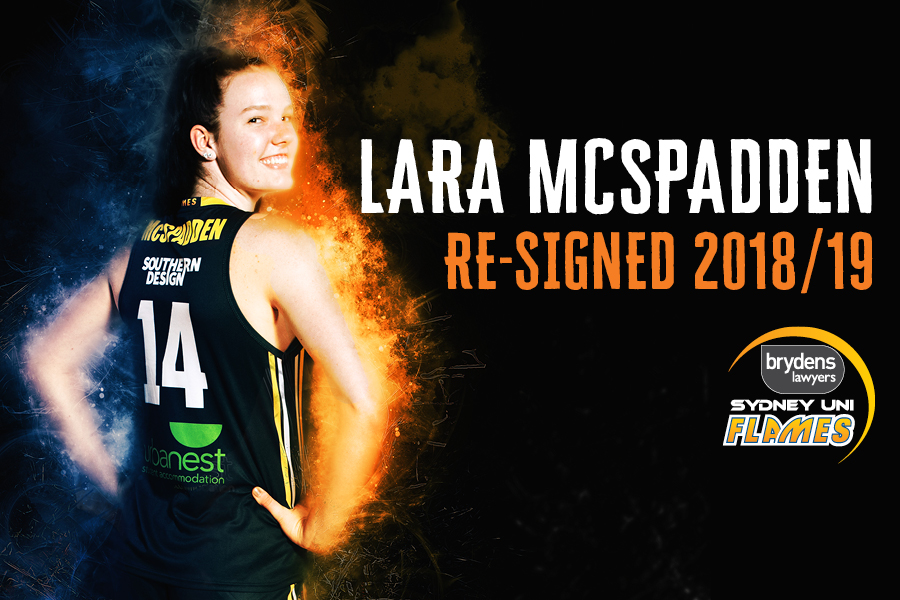 The Brydens Sydney Uni Flames are proud to announce they have re-signed their exciting WNBL Centre/Forward, Lara McSpadden for the 2018/19 season.

The imposing and athletic McSpadden was a part of the Brydens Flames 2016/17 Championship squad in her rookie year and a member of the 2017/18 Finals team and is keen to continue her development as a top-line WNBL player.

“I’m very excited to be coming back to the Flames for the third year. I’m motivated to keep working on skills I’ve learnt from the girls and to hopefully get back to a position where we can get the championship again!” McSpadden said.

A Newcastle junior, the 18 year old McSpadden, in addition to her efforts with the Flames last season, was awarded the Basketball NSW 2017 Best Country Female Player Award.

The Brydens Flames are particularly pleased to retain McSpadden as when she signed her first professional WNBL contract in August 2016 she was the then youngest player on the Flames roster.

“It’s great to have Lara back for her third season as we have been impressed with her development as a player and person and we see her as someone ready to take that next step,” Flames General Manager Karen Dalton said.

“Lara typifies what the Flames are aspiring for in their players, NSW-based elite athletes who believe in themselves and wish to achieve more. We wanted to retain Lara and we are looking forward to what she can deliver in 2018/19.”

McSpadden who manages diabetes with her professional sporting career is an inspiration to many showing that diabetes doesn’t mean you cannot pursue your sporting dreams. McSpadden has represented internationally every year since 2015 and in 2016 helped the Australian U17 Sapphires win the World Championship in Spain.

McSpadden, who will spend the WNBL off-season playing SEABL with the Sydney Uni Sparks, is among the first of a number of key Brydens Flames signings for the 2018/19 season.

Click HERE to be one of the first to receive information regarding 2018/19 memberships!