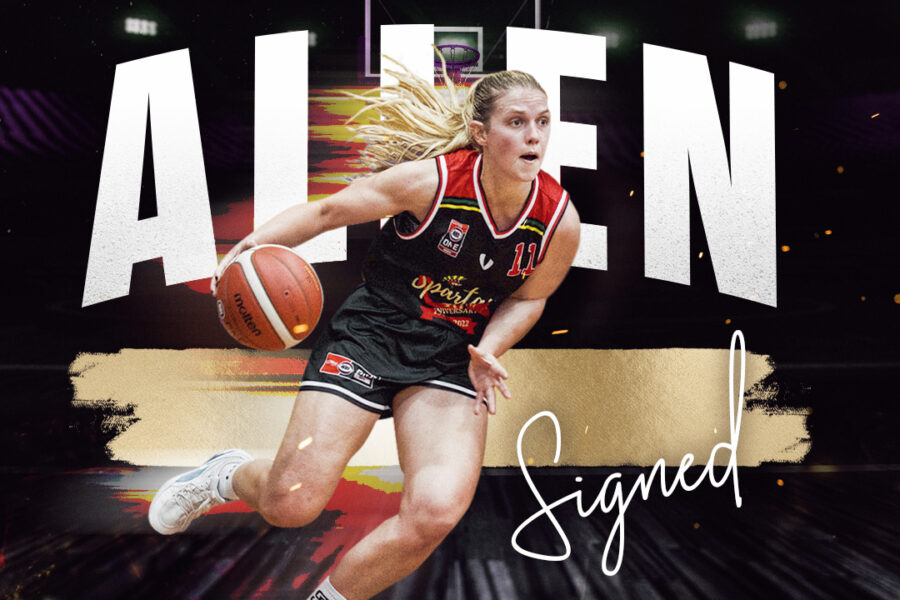 The Sydney Flames roster for the 2022-23 season is officially complete following the signing of electric guard Madelyn Allen.

Her signing comes off the back of her strong play alongside Flames and Tall Ferns star Kalani Purcell at Southern Districts in the NBL1 North – with the 28-year-old averaging 17.30 points, 6.85 assists and 5.05 rebounds per contest.

“I have watched Maddy play since her junior representative days – she brings a lethal three-point shot, a level of poise and decision making that we value in the team,” coach Heal said.

“Maddy is a tough defender that can play multiple positions and her leadership will be an asset to us coming off the bench.

“We scouted players from all over the country and took our time to find the best player available and also the best person for this role.

“I’m really confident that Maddy has her best basketball in front of her.”

Allen, who played her junior basketball with the South West Metro Pirates, can’t wait to join her Flames teammates, as they work towards the club’s fifth WNBL championship.

“At the age of 28, I thought my time had come and gone to play at a WNBL level, so to be presented this opportunity is extremely exciting,” said Allen, who spent the 2018-19 season as an injury replacement/development player for Townsville.

“It all came about after my Spartans played against Shyla and Tiana in NBL1 and I played pretty well.

“Fast forward a couple of days, Shane and I spoke on the phone and it snowballed very quickly.”

Allen, who is a teacher by trade, credits her Spartans teammates for helping this chance come about.

“My Spartans team is so well-rounded and honestly one of the best teams I’ve ever been a part of, as we all just let each other play our natural games and do whatever it takes to win,” said Allen, who actually went to high school and played all her junior representative basketball alongside Purcell – including win a state championship together against Shane Heal (as his daughter Ash was playing).

“The whole season has been incredible and everyone is locked in on not only winning a NBL1 North conference title but also a national championship.”

Once that all wraps up, Allen outlines just what kind of player the Flames will be getting in 2022-23.

“As Shane has joked with me, I’ll be the oldest on the team this season, so I’ll definitely try and bring leadership to the group, even though I don’t have a whole lot of experience at this level rather just having played basketball for so long,” said Allen, who admits the Flames’ exciting brand of fast-paced hoops suits her game.

“On top of that, I’ll try and bring poise out on the court, be a potent scorer when called upon and simply do whatever the team needs to help win – not to mention I always pride myself on being the absolute best teammate I can be.

“On the flip side, I believe Shane, who I’m extremely excited to learn from as he’s played at every level, is upfront with all his players and appreciates all the processes that go into a season, and the club can help take my game to another level,” she said.

“They provide me with the confidence and feedback to strengthen my game, especially be able to go against all the outstanding players we have assembled at the Flames – I can’t wait to get started.”

The WNBL is set to tip-off in November and the schedule will be released soon.