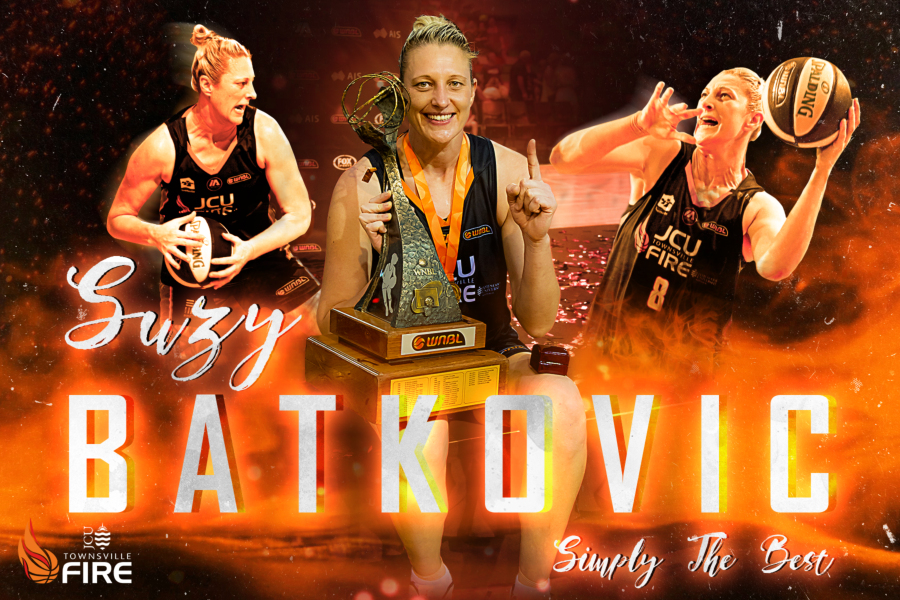 JCU Townsville Fire captain Suzy Batkovic has today announced the 2018/19 Chemist Warehouse WNBL season will be her 17th and final in the competition.

Over the past two decades, Batkovic has established herself as one of the WNBL’s greatest ever players, re-writing the record books en route to unprecedented individual success.

Within striking distance of moving past Rachael Sporn as the league’s all-time leading scorer, the 37-year-old remains at the peak of her powers after guiding the Fire to the 2017/18 title in January – her third with the club and fifth overall – and banking her sixth WNBL MVP in seven seasons.

Remarkably, the legendary Lauren Jackson remains her closest rival in this category with four WNBL MVPs in her own right.

To round out a spectacular 2017/18, Batkovic was also named the Rachael Sporn Medallist as the Grand Final MVP after waging an all-out war with Liz Cambage to deliver the Fire their latest crown.

Having also spent eight seasons in Europe which delivered a further four titles including the 2003-04 Euroleague championship with Valenciennes, Batkovic said she knew the time was right to go out while she remained at the top of her game.

“It’s been an amazing career to be able to travel the world playing the game I love,” Batkovic said.

“But I know the time is right for me now to finish up at the end of the season.

“I have had the good fortune of enjoying some incredible experiences, none more so than being able to represent Australia at three Olympic Games, and I have loved every minute of it.

“I’m sure I will miss it when it is gone, but for now, my focus is on defending our title and trying to go out with one final championship.”

Having won her first WNBL title as a teenager with the AIS, Batkovic won a second with the Sydney Panthers before relocating to Townsville for the Fire’s debut season in 2001/02.

Upon her return to the club in 2013/14, the triple Olympic medallist has taken her game to lofty new heights and remains the competition’s most dominant player.

Are you ready to watch the Fire fly? The three-time @WNBL champions are out to defend their title this summer and they want you by their side! Become a member today —> https://t.co/kyXoqqdlt8 #FireUpTownsville pic.twitter.com/g7d3tPkOkq

Fire coach Claudia Brassard said it had been a privilege to work alongside Batkovic over the past five seasons, and with one final year up her sleeve, was hoping the club could provide her with the ultimate fairytale finish by defending their title in 2018/19.

“Suzy has been an unbelievable player – one of the greatest WNBL players of all-time if not the greatest,” Brassard said.

“Her longevity in the competition – noting she also spent the best part of a decade in Europe in her prime – continues to astound me, but over the years her game has evolved and adapted and throughout that she has remained the consummate professional.

“She knows what it takes to get her body right before each game and is meticulous with her planning, but at the same time, her ferocity to succeed and desire to win cannot be overstated.

“She’s been a titan of Australian basketball and will be an automatic hall-of-fame inclusion.”

The Fire will commence their title defence at Townsville Stadium on October 14 when they host Dandenong and unfurl their 2017/18 championship banner.

Click here to become a member of the Fire today.

The Fire would like to congratulate Suzy Batkovic on her incredible WNBL career.