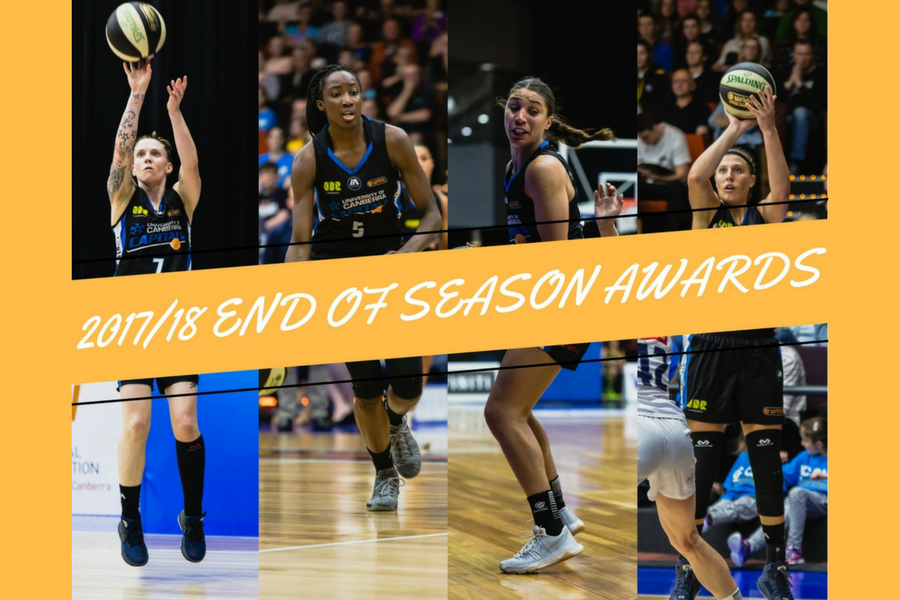 The University of Canberra Capitals recently held their annual end of season award ceremony to celebrate the end of the 2017/18 WNBL season, on Thursday morning.

The presentation consisted of a breakfast at Crown Plaza Canberra with all players, support staff, stakeholders and sponsors in attendance.

Congratulations to all award recipients and nominees.

After returning to the UC Capitals after an extended stint in Europe, Nat Hurst was selected as Captain for the 2017/18 WNBL season and has been a stand-out in the league. Hurst is first in the league this WNBL with the highest average assists, leading with 6.72 (APG). She is also ninth in the league for average minutes on 33.19 (MPG).

The 34-year-old and seven-time championship winner was also recently selected to take part in the Preliminary Commonwealth Games Opal Squad after the conclusion her WNBL season.

In her debut season for the UC Capitals, Chevannah Paalvast has had a significant impact in the Capital. The New Zealand international and former Townsville Fire championship-winner, Paalvast has only had 10 turn-overs all season, lowest within the UC Capitals.

Although the stats don’t reflect her impact on the game, the 26-year-old has also gained more game time during the back-half of the season due to the omission of an injury stricken UC Capitals squad. Defensively, she has been instrumental in the UC Capitals piecing  together their back-to-back wins late in the season.

Hailing from a small town in Nebraska, American import Jordan Hooper has not only impressed fans all season long, she has also created a long-lasting effect on her fellow teammates. Hooper has played every single match this season and has averaged 11.2 points per game.

CAPITAL ON THE RISE

18-year-old Ezi Magbegor has had a marvelous past few months in the WNBL. After gaining more minutes towards the back-half of the season, Magbegor did not let her opportunity slip past as she sits sixth in the league of average blocks on 1.16 and first in the team for blocks with 22. The teenage sensation was also recently selected to join the Preliminary Commonwealth Games Opal Squad at the conclusion of her WNBL season.

The recipient of the 2017/18 UC Capitals Fan Favourite award was chosen solely by the fans online and is selected for the contribution to basketball both on and off the court. With close to 1,000 votes, this year’s winner is Captain Nat Hurst.

A match-up with the league-leading Perth Lynx awaits as the UC Capitals as they look to finish their season with a bang at the National Convention Centre, 7:30pm Friday night. The UC Capitals are offering $10* Adult & $5* Kids tickets online via Ticketek.