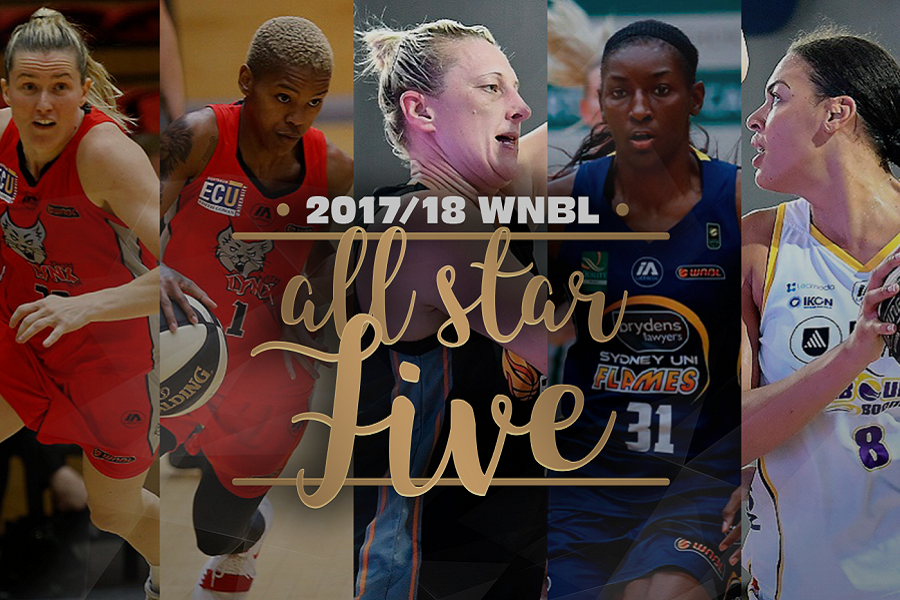 The 2017/18 WNBL All-Star Five consists of four teams with Perth Lynx represented by two back court players in Sami Whitcomb and Courtney Williams and they have been joined by Asia Taylor of the Brydens Sydney Uni Flames, Suzy Batkovic from the JCU Townsville Fire and Deakin Melbourne Boomers’ Liz Cambage.

For Whitcomb, this is her third consecutive appearance in the All-Star Five since debuting in the league in 2015/16. While her point production dropped compared to last season due to the arrival of Williams, Whitcomb still finished fifth in the league with 17.2 points per game while shooting at 38% from the three-point line.

She also led the competition with 2.6 steals per contest and finished in the top ten for assists with 4.4 which was a career-high.

Team mate Williams becomes only the eighth American to be named in the All-Star Five after she recorded 21.3 points (second in the league), 6.9 rebounds (tenth) and 2.2 steals (fourth).

Standing at just 173cm, Williams’ extreme athleticism was on show as she led the Lynx for rebounds and blocks (with a total of 16) while also earning seven nominations for Team of the Week, an equal-high for the league.

Taylor has earned her second consecutive place in the All-Star Five in her second season with the Flames, once again leading the club with 18.9 points and 7.7 rebounds per game.

The forward recorded five double-doubles in 2017/18 and was named to the Team of the Week on six occasions as well as earning the Round 11 Player of the Week.

Having already rewritten the record books last season with her fifth MVP, Batkovic now sits equal-second for All-Star Five awards thanks to her seventh nomination this season.

She is placed alongside Michele Timms, Kristi Harrower and Shelley Sandie with only Rachael Sporn (with eight selections) sitting above her.

Recording 20.5 points and ten rebounds per game through the regular season, Batkovic was one of two players to average a double-double and her dominant presence allowed her to finish third in two-point field goals made and third for free-throws made.

At the other end of the floor, Batkovic was just as important to Townsville as she collected more defensive rebounds than any other player in the league while finishing fifth for steals (1.8) and fifth for blocks (1.1) per contest.

Rounding out the 2017/18 All-Star Five, Cambage is aiming to complete a successful return to the WNBL with a Championship after already claiming four Player of the Week awards (first in the league) and seven Team of the Week nominations (equal first).

Her inclusion in the All-Star Five marks her third selection overall and her first since 2010/11, having led all players with 23.8 points and 10.3 rebounds this season while tallying ten double-doubles.

Cambage’s season-high of 44 points came in Round 6 against Adelaide while she also collected the only 20-20 game of the year with 23 points and 23 boards against Perth in Round 3.

Stay tuned tomorrow for the announcement of the 2017/18 WNBL MVP which will be one of the members of the All-Star Five!