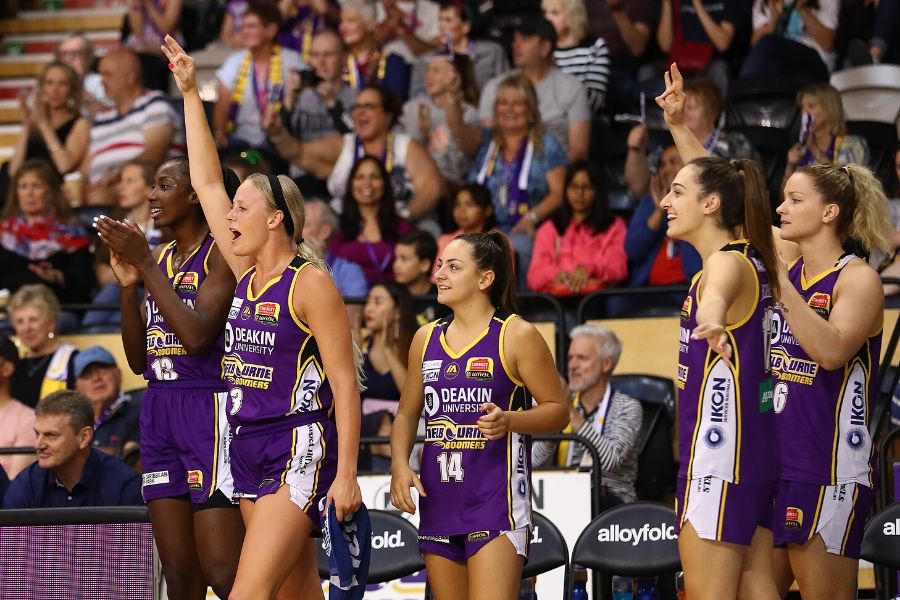 ALL SMILES FOR BOOMERS IN COMPREHENSIVE WIN OVER FLAMES

The Melbourne Boomers have solidified their position in second place on the WNBL ladder with a comfortable 23 point win over the Sydney Uni Flames at Brydens Stadium.

After a seesawing first quarter, Guy Molloy’s team pulled away in the second term and never relinquished the lead again.

Cayla George (18 points, 10 rebounds) was also a tough match-up all game with her screen-setting and physicality around the rim, and was particularly telling on the boards, where the Boomers completely outmuscled their opponents – They pulled down more than twice as many rebounds in the first half.

While it was a difficult day for the home side, Lauren Scherf (20 points, 9 rebounds, 4 blocks) stood out, having one of her most productive games and hitting 2 of 3 three-pointers.

In contrast, and compounding the Flames’ woes, the aforementioned Kunek had one of her more subdued games in a career-best season, finishing with 13 points on 3 of 12 shooting.

While the side were bolstered by the return of canny point guard Brittany Smart, who played limited minutes in her first game since Round 1, they’ll be crossing their fingers for Tahlia Tupaea, who limped off the court with a knee injury in the first quarter, and faces the prospect of joining star forward Colleen Planeta on the sidelines.

The absence of Planeta was acknowledged by Boomers coach Guy Molloy in his post-match conference.

“It was tough for the Flames because they’re playing without Colleen Planeta…that’s a tough break for them,” he said, adding that his side has every intention of making sure they stay in the top 2.

“We’ve got a lot of work to do to get over [the top-of-the-table] Southside but a top 2 finish would be great.”

Meanwhile, Flames coach Katrina Hibbert was particularly disappointed with the amount of rebounds her side conceded in the heavy loss.

“There was a lack of desperation on our part. That is something for us to work on in the next 5 rounds… We’ll get back to training and drill it.”

The Boomers will be relieved to bank the points from this win with a taxing round ahead of them. They travel to Adelaide for a Friday night clash with the in-form Lightning (10-6) before returning home for a blockbuster against the league-leading Southside Flyers (13-3).

The Sydney Uni Flames, meanwhile, will host the Townsville Fire (3-12) next Sunday, as they try to finish an injury-plagued season on a positive note.