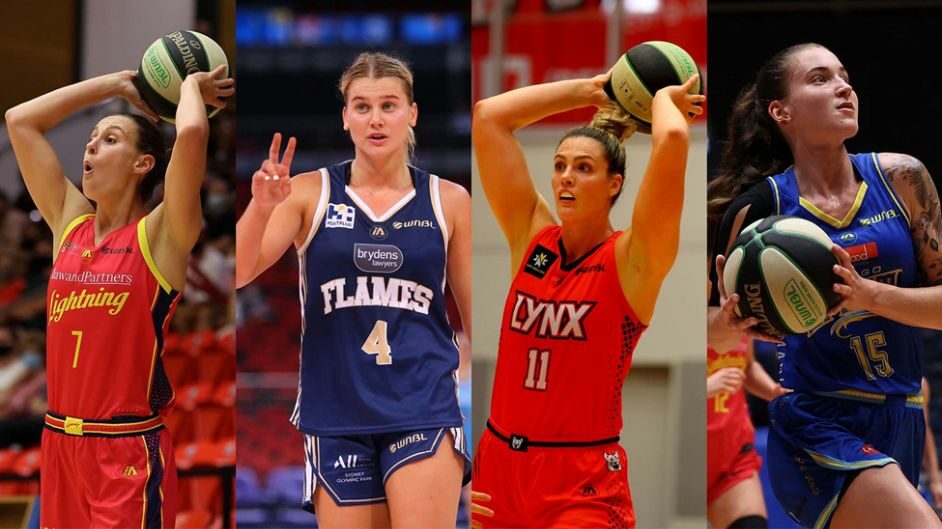 Asking the hard questions: The WNBL promises to deliver one of the most even seasons ever

With just days until the WNBL season gets underway, with a blockbuster Grand Final re-match between the Melbourne Boomers and Perth Lynx on Wednesday night, excitement surrounding the season is hitting fever pitch.

There are worthy storylines to follow on every team, each who have their own questions to answer. So, here’s some to keep an eye on as we preview what promises to be one the most even WNBL seasons ever.

Adelaide Lightning – is there enough support around Steph Talbot?

Steph Talbot produced an incredible World Cup campaign – and was duly rewarded with All-Star Five honours – and having already claimed the WNBL MVP Award in 2020, there’s no doubt she’s one of the best players set to line-up in the league this season.

In 2021/22, Talbot had Alanna Smith by her side and the pair were a tremendous duo for the Lightning, lifting the team to a finals berth before being eliminated by eventual champions, Melbourne.

This season there’s no Smith and a lot more responsibility will lie on the shoulders of Marena Whittle, as well as new additions Lauren Mansfield and imports Kiersten Bell and Jacinta Monroe. Aussie young gun Abby Cubillo will also have plenty of opportunity to solidify herself in the guard rotation.

Whittle had a great NBL1 campaign with the Ringwood Hawks, leading them to the 2022 NBL1 South Championship with averages of 17.2 points, 11 rebounds and 2.2 assists per game.

Bell is an interesting prospect for Adelaide and could be a game-changer. A member of the Las Vegas Aces 2022 WNBA Championship squad, Bell – in her rookie season – found it difficult to earn playing time on a Aces loaded roster, but throughout her college career she displayed so much tenacity and excitement, averaging 23.4 points, 7.3 rebounds, 2.7 assists, 1.8 steals and 1.6 blocks for game in her final season with Florida Gulf Coast University.

Any time you’re able to pair league MVP’s together in the same frontcourt, you just have to pull the trigger and that’s exactly what Bendigo has done by bringing in 2019 WNBL MVP Kelsey Griffin to play alongside reigning WNBL MVP Anneli Maley.

While Griffin is now in her mid-30s she’s showing no signs of slowing down as she continued to be a massive presence for Canberra last season, averaging 15 points, 8.3 rebounds and 2.3 assists per game.

I believe this duo – along with other additions – has the potential to really lift Bendigo towards the finals. The other key additions to the squad are guards Kelly Wilson and Abbey Wehrung, as well as forward Alicia Froling. With a new coach in Kennedy Kereama and plethora of new players, it may take some time for this team to gel, but they have serious potential to cause some headaches for opposing teams.

All eyes will be on Jade Melbourne in Canberra this season, and while perhaps the most exciting young prospect in Australia has the potential to explode to another level, the 20-year-old will definitely need help if the Capitals are to make it back to the post-season.

The loss of Brittney Sykes is massive for Canberra as she became the leader on both ends of the court, while Kelsey Griffin and Kelly Wilson making the move to Bendigo was a double blow.

The Capitals have responded to those losses by adding imports Rae Burrell and Dekeiya Cohen, who both have major upside. Burrell, a 22-year-old forward, was drafted by the Los Angeles Sparks with the ninth overall pick earlier this year in the WNBA Draft after a four-year college career at Tennessee. Unfortunately, her rookie WNBA season came to a very early finish after a knee injury in May kept her out for the season.

She has the potential to be a real presence in the WNBL, with her versatility and the fact she plays with so much energy will bode extremely well alongside Melbourne. Cohen will add another level of force to the Capitals, as she plays hard on both ends and averaged 13 points, 9.4 rebounds, 2.5 assists and 2.3 steals last season in Israel with Hapoel Rishon Lezion.

Melbourne Boomers – can they live up to the hype again?

The Melbourne Boomers have gone from being the hunter to becoming the hunted after claiming the championship last season, and they haven’t rested on their laurels as they look set to make a another run towards the business end of the season.

It’s an incredible feat for the Boomers to be able to replace two superstars in Ezi Magbegor and Grand Final MVP Lindsay Allen with import Olivia Nelson-Ododa and Opal Kristy Wallace – both of whom I believe will quickly become fan favourites.

Forward Nelson-Ododa had a strong college career at UConn before being drafted by the Los Angeles Sparks with the 19th pick in the WNBA Draft earlier this year. As her rookie WNBA season progressed, Nelson-Ododa just got better and better with more opportunity, especially as Liz Cambage’s season spiralled out of control.

Nelson-Ododa was ready when her name was called in Los Angeles and I get the feeling she’ll be ready to put the WNBL on notice once she settles into the league and how referees call the game in Australia.

We all saw the energy and doggedness that Wallace plays with at the World Cup and people who have watched her for years know that’s exactly what she brings every time she steps on the court.

Oh, and they still boast Opal stars Cayla George and Tess Madgen (who will miss the first month of the season due to a knee injury), as well as bringing back stellar import Tiffany Mitchell for her second season in Melbourne.

Perth Lynx – can Alex Sharp and Lauren Scherf take their respective games to the next level?

With no imports this season – after going all out with superstars Jackie Young and Marina Mabrey last season – the Lynx need others to step up. We know exactly what we’re going to get from Sami Whitcomb and she’s undoubtedly the key for Perth, but if Lauren Scherf and Alex Sharp can take their respective games to a new level, the Lynx could be a problem to deal with.

Both have continuously improved over recent years and find themselves on the fringe of Opals squads, so they have plenty to prove, not just in the WNBL but for the national team too.

Scherf was a double-double machine last season for Perth and proved herself a reliable three-point shooter – albeit in small doses – as she connected on 40% of shots from deep. If she continues to stretch the floor and have confidence in her shot, her importance to Perth will only grow.

Sharp showed great potential last season but with so much talent on the Perth roster, which also included Darcee Garbin, she didn’t have a huge role offensively. That will change this season and I think she’s ready to take that opportunity with both hands.

The Lynx also have a pair of Aussies returning home in Amy Atwell and Chloe Bibby. Atwell is one of the young guns in the league to watch and her hot shooting from deep is what separates her from the pack.

The Flyers have an embarrassment of riches in the frontcourt, boasting Lauren Jackson, Sara Blicavs, Abby Bishop, Kayla Thornton and Carley Ernst. Those names together are enough to give opposing coaches sleepless nights preparing a game plan to slow them down.

The backcourt is a different story though, and while the talent can’t be questioned, the depth absolutely can be. Bec Cole and Maddy Rocci form a top-tier starting backcourt, but the only other guard currently on the active roster is Aimie Rocci, who I also rate highly, but having just three guards is a gamble and if injuries occur – just as they did last season – they’ll be in trouble.

Obviously, there’s plenty of time for Southside to sign another guard as they still have room to add one more import and perhaps if they do that, they might just boast the most complete roster in the league.

Sydney Flames – a Shyla Heal and Tiana Mangakahia backcourt is going to be fun, but will it produce wins?

Shyla Heal is an excitement machine and Tiana Mangakahia is a magician with the basketball. Combined, they have the potential to be the most electrifying backcourt in the league.

With that being said, there’s some tremendous backcourts around the league and will they be able to compete night in, night out against the best guards in the league? Only time will tell, but the pressure will certainly be on as the Flames will rely heavily on both to generate offence.

The addition of import Jocelyn Willoughby is a huge get for the Flames and although the last two seasons of her WNBA career have been side-tracked due to injuries, a fully fit Willoughby has the potential to be one of the best players in the WNBL.

Willoughby brings a versatility to the Flames that few others in the WNBL can and with her defensive pressure, she’s a true presence on both ends of the court.

Townsville Fire – do the Fire have enough to compete with the powerhouse teams?

Imports Tiana Williams and Karlie Samuelson join Steph Reid, Lauren Nicholson and Zitina Aokuso in Townsville, which on paper reads as a really strong core for coach Shannon Seebohm. The addition of Mikaela Ruef – who had some monster games for Canberra last season – is also key for the Fire.

Reid and Nicholson are ruthless defensive guards, who can change the course of a game on a single play that rips the rug out from under the opposition, while they’re also relentless drivers on the offensive end which creates opportunities for themselves and teammates to score often.

Samuelson is the type of player that can get hot and shoot the lights out. Although she’s been unable to find a stable home in the WNBA, she’s previously played big minutes in the Europe and will enter the WNBL as one of the shooters to keep an eye on.

With a robust core, the potential is there for the Fire to ignite a finals run.

The Pick and Roll pre-season predictions