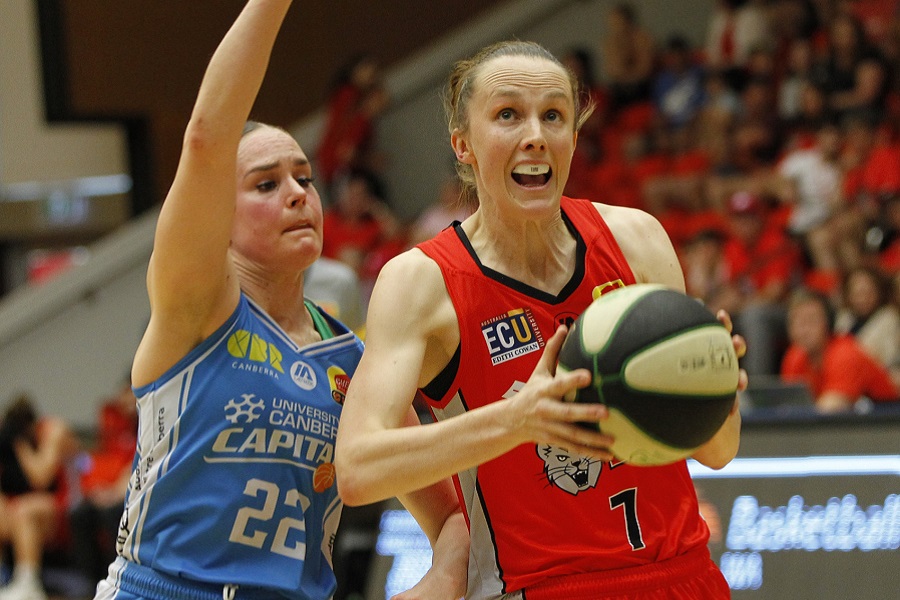 Knocking down 15 three-pointers for the game, the University of Canberra Capitals lit up the Perth Lynx in Game 1 of their best-of-three Semi-Final series, prevailing 95-76.

The Caps were on fire from the outset in front of a 2,000 strong crowd at the AIS Arena, beginning the game with a 16-4 run and moving out to a 12-point lead at quarter-time.

Kia Nurse and Kelsey Griffin were the instigators- Nurse punishing the Lynx with her mid and long-range jumpers while Griffin continually attacked the rim to get herself to the free-throw line.

Both played also nailed late triple’s to give the Caps all the momentum at the first change.

Brittany McPhee (25 points, eight rebounds) provided the only resistance for the visitors, scoring ten of her team’s 16 points in the opening term but with her keeping the margin manageable, it gave Perth a base from which to launch from in the second period.

The quarter was a complete reversal of the first, with Alison Schwagmeyer (13 points, seven rebounds) and Kayla Steindl negating the Caps’ late three’s with two of their own.

Steindl (ten points, three assists) then was fouled beyond the arc and helped Perth to a 10-0 run to start the second term- all of this happening with Nurse and Griffin on the bench.

Griffin (18 points, 12 rebounds, seven assists) returned to steady the ship somewhat but the Caps shot just 3-15 for the term and when Toni Farnworth scored five in a row, the Lynx had the lead for the first time in the game.

They pushed ahead by six at the main break on the back of a 27-10 quarter, all of a sudden owning the momentum at half-time.

The game had another twist in store in the third period though with the Caps quickly re-finding their form from the opening stanza.

Perth were unable to halt their transition game and the hosts went on a game-winning 17-0 run with Nurse scoring nine points.

Leilani Mitchell also got in on the action, raining three-pointers on the Lynx but Nurse (31 points, three steals) was the catalyst, out-scoring Perth by herself in the third quarter with 17 points.

Nurse’s points total was just two shy of her season-high while the league’s best three-point shooter added another six to her tally.

Those three-pointers then opened up the key for Marianna Tolo who got to work with eight points and seven rebounds before Mitchell (24 points, six rebounds, seven assists) continued her barrage from long-range, joining Nurse and Griffin in double-figures with 12 points just in the fourth.

“The shooting exhibition of Nurse and Mitchell was quite outstanding,” said Lynx head coach Andy Stewart.

“Over an extended period of time, if they can keep up that three-point percentage, that’s world class and they will be very tough to beat.”

“This win takes a bit of the pressure off,” said Capitals head coach Paul Goriss.

“We wanted to protect our home court like we have all season. We lost our way in the second quarter… but got back to the running game and high-possession game we want to play in the third.”

“We had an excellent second quarter and we were playing so well,” said Stewart.

“We missed a bunch of opportunities so we should have been up by eight or ten at the half which would have helped against their run at the start of the third. That period is a concern, we lost the game right there.”