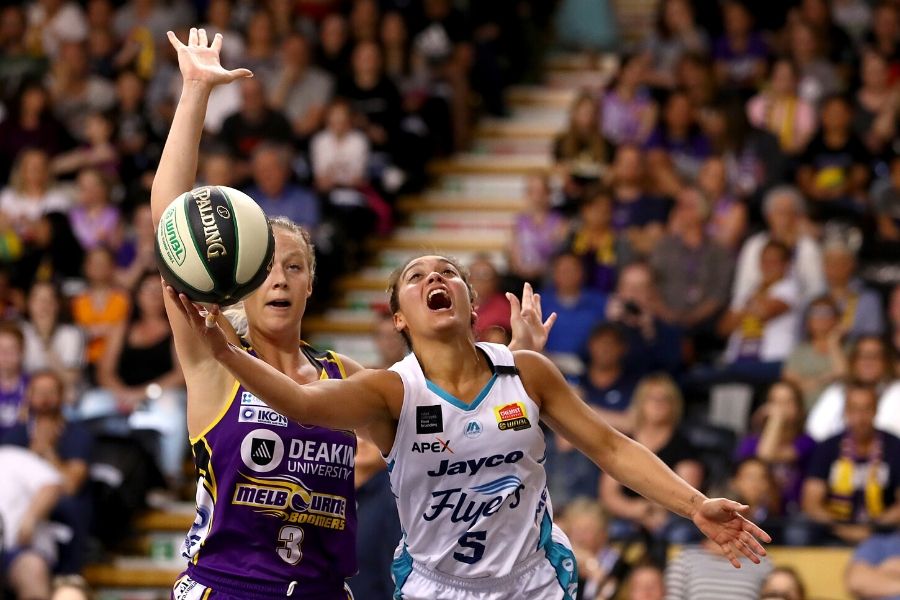 The Southside Flyers reminded the WNBL why they’re the team to beat after defeating the Melbourne Boomers in a classic overtime thriller by 2 points (75-73) at Victoria’s State Basketball Centre.

Led by 21 points from the experienced Leilani Mitchell, a double-double to Mercedes Russell, and double-digit figures from Rebecca Cole and Jenna O’Hea, the visiting side were forced to grit their teeth in the win, a top-of-the-table clash that could be a finals preview.

The Flyers also had to contend with a mammoth 24 points and 12 rebounds from Boomer Ezi Magbegor, whose side threatened to claim a stunning upset.

If you’d flicked on the telly in the first quarter though, you wouldn’t have foreseen such a close contest: The Boomers took over four minutes of match time to hit their first field goal of the game, stifled early by a switched-on Flyers outfit.

But once the home side settled, the buckets came thick and fast. At the end of the first term, Guy Molloy’s team led by four points (20-16) against the Flyers, who would have been further behind if not for some sharp-shooting by their captain.

O’Hea made an early habit of dagger threes, hitting three of four from outside in the first quarter alone, and scoring 11 of the Flyers’ first 16 points.

The Boomers threw down the gauntlet after the first break though, and when co-captain Maddie Garrick made her first three-pointer midway through the second quarter, it began to open up a buffer between the crosstown rivals, Magbegor exerting her influence to put up 13 points for the half.

However, for all of the Boomers’ momentum, the Flyers brought it back to 35-30 at the main break, and while the home side responded, fighting back to make the lead 53-47 at the end of the third quarter, it was obvious that coach Cheryl Chambers’ side were up for the challenge.

As the often combative contest tightened up, the influence of the Flyers’ starting players grew accordingly – At one stage, with four minutes to go in the third quarter, Mitchell and O’Hea had combined for 27 of the Flyers’ 41 points.

Accordingly, the scoreboard eventually moved in the Flyers’ favour, and with the match 55-all with seven minutes to go in the fourth quarter, the tension in the stadium ratched upwards.

Russell – who finished with 18 points and 11 rebounds – started to force herself into the game for the visitors, who responded to every challenge thrown their way by the Magbegor and the Boomers, even when the game seemed lost.

With 90 seconds to go, Magbegor blocked a potential go-ahead lay-up for Sara Blicavs, before Garrick raced to the other end and hit a devastating three-pointer.

It should’ve been a game-winning moment.

But the Flyers continued to come at the Boomers, and eventually forced the game into overtime: A Magbegor foul against Mitchell with five seconds to go sent the ice-cool point guard to the line, and she didn’t miss either shot, drawing the game level.

With the Boomers backing up from Friday’s win against the Lightning and missing starting point guard Lindsay Allen, the in-game losses of Garrick (concussion treatment) and a fouled out Sophie Cunningham took its toll on the second-placed team as the Flyers’ class shone through in overtime.

Russell was especially influential, and it was she who found room underneath the basket to put the Flyers ahead in the closing moments.

Mitchell stretched the lead further, and while the Boomers attempted one last fightback, the injured Allen, emblazoned upon the big screen, could only watch on as Magbegor held onto the ball as time expired.

Speaking after the game for the Flyers, Chambers said her side did well to get away with a win.

“I’m really proud that we dug in because we got ourselves in some huge holes,” she said

Meanwhile, for the Boomers, Molloy was proud of the performance but couldn’t help but feel as if his side had let an opportunity slip.

“I’m proud of our team to come out of it facing the adversity that they did… It is bittersweet,” he said

“We missed some lay-ups, some free throws. All our starting guard combinations were out… Still, we had the game [in our hands and lost it].”

The Melbourne Boomers will not be afforded any time to lick their wounds and will instead travel to Canberra to tip off round 14 against the UC Capitals on Friday, January 17 at the National Convention Centre.

It is the first of a back-to-back for the Boomers, who then go to Brydens Stadium to the Sydney Uni Flames on Saturday afternoon.

The Flyers are granted a little more time to regroup before hitting the road themselves, facing the Bendigo Spirit on Saturday night (January 18 at Bendigo Stadium) before hosting the UC Capitals at Dandenong Stadium on Sunday, January 19.