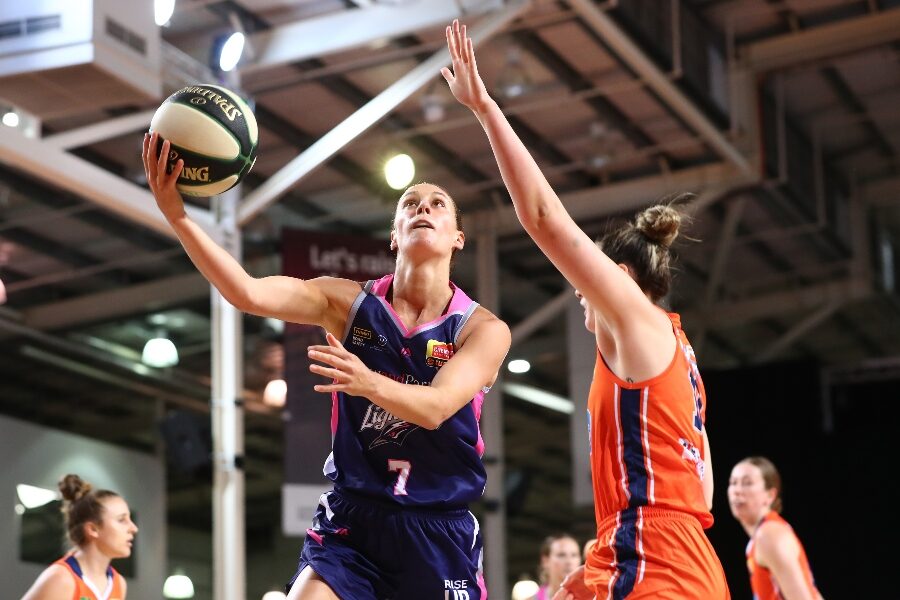 A shot clock glitch may have caused a delay but there was no stopping Steph Talbot who inspired Adelaide Lightning’s 75-53 victory over Brydens Sydney Uni Flames in the 2020 Chemist Warehouse WNBL.

Opals star Talbot has emerged as a 2020 MVP contender after continuing her scoring blitz with 30 points along with 12 rebounds in Cairns on Saturday.

It seemed only something out of the ordinary would stall Talbot, who hit the ground running for Adelaide against the Flames.

Then after the first term it happened.

A power outage on the scorer’s bench led to a shot clock failure and delayed the start of the second term by about 15 minutes.

Play finally resumed with an official counting down the shot clock on a microphone over the venue’s PA system for the term before the technology came back to life again in the third quarter.

Both teams needed time to find their scoring groove again after the delay but Talbot eventually regained her mojo, combining with Alex Wilson (10 assists, nine rebounds) to help Adelaide claim their second straight win and a 4-1 record.

The Lightning will have little time to savour the victory thanks to a hectic schedule after emerging this week from seven days in quarantine in Townsville following a coronavirus cluster in South Australia.

The Flames clash started a run of nine games in 16 days for Adelaide who back up on Sunday against heavyweights Jayco Southside Flyers.

But at least early season front runners Adelaide now appear back to their best.

“Our last few games since quarantine have been a bit messy,” Lightning captain Talbot said.

“We weren’t really happy with how we played. That was more of the style of basketball that we want to play so that was good.”

They showed plenty of fight against Adelaide, with Rio Olympian Nat Burton (14 points) leading the way.

“There was a lot to learn from that, but we have got to keep our heads up – we can’t dwell on it,” Burton said.

The lead changed four times in the first quarter before the Lightning went on a 12-0 run to grab a 20-12 buffer at the opening break.

The shot clock outage delayed the second term, and it took a while for both teams to regain their scoring rhythm when they returned.

A total of just 26 points were scored in the second quarter with the Flames at one stage shooting at 19 per cent from the field as Adelaide went into half-time ahead 32-26.