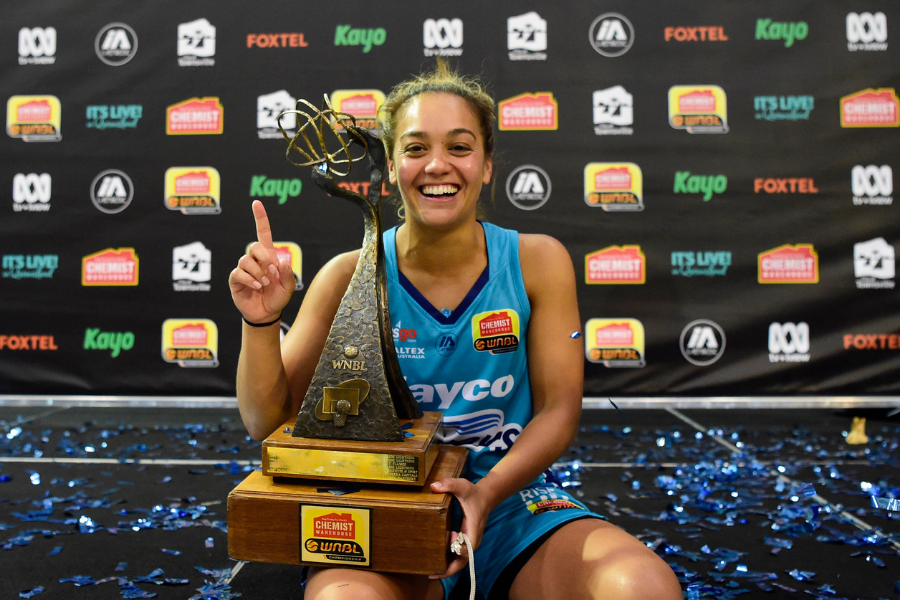 It seemed Leilani Mitchell had little to complain about after inspiring the Jayco Southside Flyers’ 2020 Chemist Warehouse WNBL championship win and collecting the Rachael Sporn Medal as MVP on Sunday.

But the Chemist Warehouse Opals guard joked she had one minor quibble as she soaked up the enormity of their achievement in Townsville.

Mitchell hit a game-high 31 points including a stunning 5-7 shooting from three-point range to spark the Flyers’ 99-82 win over JCU Townsville Fire and seal the third WNBL title of her stellar career.

However, she fell one short of the all-time WNBL grand final point scoring record set by Adelaide Lightning’s Renae Camino back in 2008 – not that Mitchell knew at the time.

“I didn’t realise how close (to the scoring record) I was until I was subbed out (late in match),” she laughed.

“Our assistant coach (Belinda Snell) said ‘I think you need to score one more point’.

“But that’s alright, as long as we win.”

Indeed, Mitchell had plenty to savour after receiving the Rachael Sporn Medal for the second time in her seven-year WNBL career with her family, partner Mikaela and young son Kash, courtside cheering her on.

The 35-year-old first earned the MVP award after steering the Brydens Sydney Uni Flames to the 2016-17 title.

She won another championship for the UC Capitals in 2018-19 but believed title No.3 in her second season with the Flyers would be hard to beat.

“The championships I have won are all special in their own way but being the year it has been and not even knowing if a season would go ahead, and the schedule we had with playing every other day, this one sits at the top,” Mitchell said.

“To be able to win the championship in a crazy 2020 is unbelievable.

“Plus Townsville pushed us hard today. We are thankful we were able to come out on top.”

Championship No.3 was made even more special thanks to her family’s presence.

Her partner and son have been with Mitchell in their North Queensland hub since early December after spending a lot of 2020 apart.

Mitchell did not see them for three months when she played for WNBA club Washington Mystics in the United States, then only spent a fortnight together before leaving again to quarantine for the WNBL season.

“Even though Kash is young it is still very hard on him. Every day (she was in WNBA) Mikaela had to deal with him asking where I was and when I was coming back, so to be with them for the last few weeks and have them here for the grand final celebrations is very special,” said Mitchell who had Kash in her arms when she received the Rachael Sporn Medal.

Mitchell was a runaway winner of the MVP honour after capping a stellar playoff campaign which also featured 19 points in their major semi-final win over the Fire.

Mitchell averaged 9.8 points per game during the regular season but stepped up in the finals after captain Jenna O’Hea battled a knee injury.

“Being the point guard, I am happy to get assists and make sure everyone is involved and that was the case this season,” Mitchell said.

“But when Jenna went down, I knew I had to step up a bit more and be a bit more selfish offensively, and thankfully my shot was feeling good especially today.”