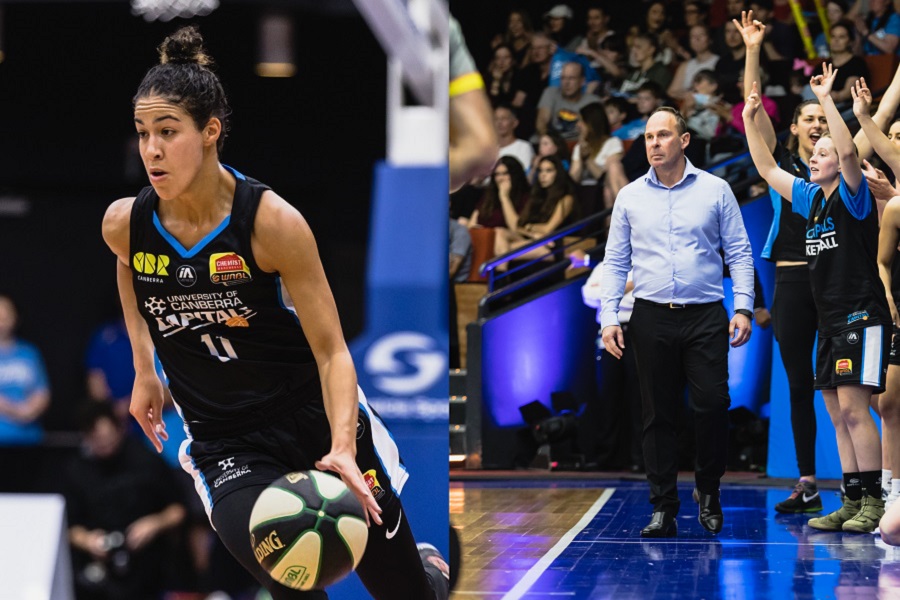 The University of Canberra Capitals have completed an October sweep of the Player and Coach of the Month awards with Kia Nurse and Paul Goriss taking out the honours respectively.

The Capitals have enjoyed an impressive start to the season despite some injury troubles to Opals Leilani Mitchell and Marianna Tolo as well as college star Kristy Wallace.

Mitchell has returned to the line-up for the last two games, coming off the bench behind Kelly Wilson who is playing at a very high level to start the season.

Goriss has opted to ease his WNBA guard into the line-up with Wilson putting up near triple-double numbers and even playing full 40 minute games at times.

Starting the season off with three consecutive wins, the UC Caps dropped a game to the Deakin Melbourne Boomers after beating them earlier in the year while also claiming victories over the Brydens Sydney Uni Flames and Adelaide Lightning.

Kaili McLaren has been a solid addition in the absence of Tolo while the likes of Lauren Scherf and Maddison Rocci continue to develop into impressive starters for the team.

Shining brighter than everyone else though, Nurse has been the standout performer through the opening month of the season.

Coming into Round 1 having only had one training session with the UC Caps, Nurse starred in the victory over the Flames.

She put up 26 points, three rebounds and three assists, earning the Player of the Week award in the process.

The following week she was quieter and suffered from foul trouble in a win over the Boomers, recording 12 points, five boards and two assists but bounced back with a double-double (14 points, ten rebounds) just two days later against Adelaide.

In their final game of the month, the UC Capitals were unable to repeat their performance against Melbourne and fell by six points but Nurse did all she could, contributing 29 points and five rebounds.

That carried her average to 20.3 points, 5.8 rebounds and two assists for October as she demonstrated a capable drive and dish game, setting up her team mates or getting to the free-throw line at will while she is also not afraid of letting the three-ball fly.

Her versatility and strength makes her a tough cover and has been a major contributing factor in the UC Caps’ hot start to 2018/19.