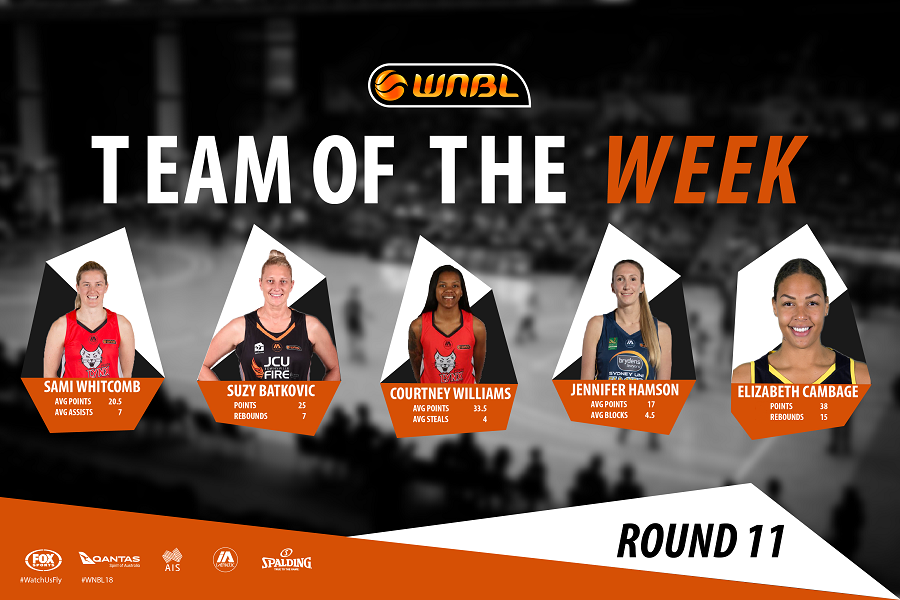 ROUND 11 TEAM OF THE WEEK

At the end of Round 5, Courtney Williams had not been named in a Team of the Week but she has now earned six consecutive nominations following a Player of the Week award in Round 11 as well.

She is joined by Perth Lynx team mate Sami Whitcomb (for a fifth time) with the guard combination now sitting side by side in the Team of the Week for the past four rounds.

Whitcomb averaged 20.5 points, three rebounds, seven assists and a steal across two victories with the Lynx now just one win away from securing top spot on the ladder.

Suzy Batkovic has equaled Williams with her sixth Team of the Week nomination after she led the JCU Townsville Fire to an important victory over the Rangers with 25 points, seven rebounds, three assists, two steals and two blocks.

Neither Batkovic nor Williams can catch Liz Cambage’s record at the moment though as she has been named for a seventh time.

Despite falling to the Lynx, Cambage did all she could with another huge double-double of 38 points and 17 rebounds.

Rounding out the Team of the Week is Brydens Sydney Uni Flames’ Jennifer Hamson who earns her second nomination after controlling the paint with 17 points, 12 rebounds and 4.5 rejections over two victories.