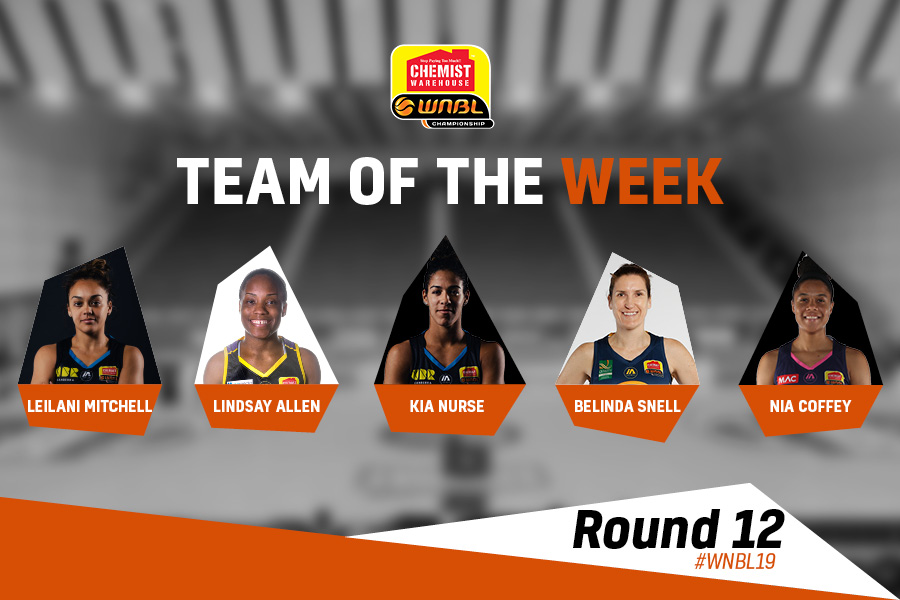 ROUND 12 TEAM OF THE WEEK

Kia Nurse heads the Team of the Week after a scintillating shooting performance in Round 12, while Lindsay Allen clocks up her fifth nod of the season for the Melbourne Boomers.

Leilani Mitchell and Belinda Snell both earn their first inclusions of the season while Nia Coffey continues to impress for the red-hot Adelaide Lightning.

Nurse had a red-hot shooting weekend as she connected on 13 triples across two wins for the Capitals, averaging 29.5 points per game.

In Friday night’s contest against the Fire, Nurse hit a career-high 33 points, including 24 in the first half, before dropping seven three’s overall.

She continued her hot shooting in Sunday’s game against the Rangers, connecting on another four three-pointers in the first half to finish with six and 26 points.

The Team of the Week honour is the third of the season for Nurse, while she also earned her second Player of the Week nod.

Allen had herself another huge game against the Bendigo Spirit, dropping 27 points for the second game in a row.

With the Boomers trailing by three in the final five seconds of regulation, Allen took matters into her own hands as she got a three-pointer to bank in on the buzzer, sending the game to overtime.

From there, the Boomers held Bendigo to just three points and secured a 71-67 victory and Allen claimed her fifth entry in the Team of the Week this season.

Nia Coffey tallied a near double-double of 21 points and nine rebounds as the Lightning narrowly defeated the travelling Perth Lynx on Sunday.

The Lightning have now won seven out of their last eight games and are on the verge of returning to the playoffs, courtesy of Coffey who is placed in the top ten for both points and rebounds with 16.6 points and 8.4 boards per game.

After an injury interrupted start to the season, Leilani Mitchell has found a purple patch of form.

The Capitals boast two representatives in this week’s team after a pair of huge wins, as the Caps won by a combined total of 72 points across the two games.

Mitchell put up 18.5 points and 6.5 assists across the two wins as she formed a deadly wing partnership with Kia Nurse, as the pair torched their opposition defenders all weekend.

The Opals star continues to lead the league in steals with two per game, with her and Kelly Wilson forming one of the WNBL’s best back-courts.

Snell nearly notched a triple-double for the Flames on Sunday, as Sydney Uni fell to the Fire in the last quarter.

After the two sides were neck and neck for most of the afternoon, it took a 13-0 run in the fourth quarter to open-up Townsville’s match-winning lead.

The Sydney Uni captain once again stuffed the stat-sheet though, coming up just one assist shy of a triple-double as she continues to shine in her final WNBL games.