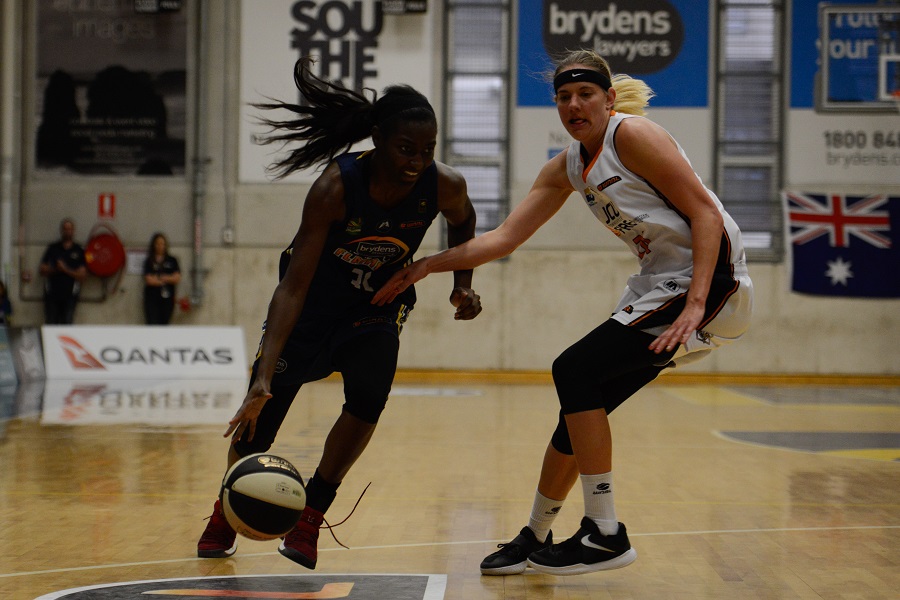 While both these teams will be preparing for a Semi-Final series in another week’s time against each other, they first must finish the season series with home court advantage in the first round of the playoffs on the line.

Townsville did what they needed to do last weekend, easily taking care of Canberra and Bendigo while also notching their highest ever score in the win over the Spirit.

They can now cement second spot on the ladder with a victory against the Flames on Saturday night but in the event of a loss, they will need to beat Perth or hope Sydney Uni suffer a surprise defeat to Bendigo on Sunday in order to stay second.

Interestingly, across the two previous encounters between these sides, the away team has come away with a three-point win both times which includes a Townsville victory at Brydens Stadium earlier this month.

In that game, the Fire led by double-digits at three-quarter time behind Suzy Batkovic’s 26 points, 11 rebounds and five assists before Katie Ebzery (21 points) and Alex Wilson (18 points) pulled Sydney Uni in front in the dying minutes.

Townsville’s bench denied the comeback though through Sydney Wiese and Darcee Garbin who had 13 points each.

Coming off a career weekend, Garbin (as well as Micaela Cocks) will be full of confidence and it will be up to the likes of Carly Boag and Sarah Graham to match the second unit’s production while Asia Taylor will also have a point to prove after being well contained last meeting.

It was a disappointing finish to the season for Adelaide last weekend as they took care of Melbourne before falling in overtime to Sydney Uni which ended any hopes of sneaking into the top four.

They are just playing for pride now alongside Bendigo who will be desperate to show something after they were handed their worst loss in club history last round by Townsville.

Two days prior to that defeat they had beaten Dandenong while holding them to just 47 points and another defensive performance like that will make things very difficult for the Lightning.

However, the hosts have a number of offensive weapons to cover including Aimie Clydesdale who scored a season-high 28 points in Round 12 and Abby Bishop who has picked up her game in the absence of Natalie Novosel while Ruth Hamblin creates a further headache off the bench for Bendigo’s undersized second unit.

Taking their winning streak to 14, Perth have secured first place with a round to play and they can now have one eye on the playoffs where they will meet Melbourne in the first round.

It will be interesting to see how they approach this weekend and whether they rest any players but with the threat of losing momentum as well as their winning streak, expect the Lynx to come out with all guns blazing when they head to Canberra on Friday night.

They will also be celebrating Alice Kunek’s 200th game while the Caps will be playing for the opportunity to move into sixth place on the ladder after splitting last weekend.

The hosts will know where they need to put in work with Sami Whitcomb and Courtney Williams tearing them apart in two previous clashes, averaging 42.5 points, eight assists and 4.5 steals together per game.

Seeing more court time in the absence of Nat Hurst, Maddison Rocci could face a real test against the Lynx back court alongside Abbey Wehrung who will need her three-point shot to be on target to match the visitors.

Dropping consecutive games in Round 12, Melbourne have still qualified for the finals thanks to Sydney Uni’s win over Adelaide and with one round remaining in the regular season, they cannot be budged from fourth spot.

That leaves them in an interesting position ahead of their final clash with Dandenong as injuries to Liz Cambage and Bec Cole kept them out of their meeting with Perth and the Boomers may not want to risk two of their starters again before the Semi-Finals begin.

Even without Cambage, the hosts should go into this meeting as favourites after the Rangers’ offence deserted them last weekend, averaging just 53 points while the Boomers still scored 66 points against the Lynx.

Dandenong may need a victory to hold off Canberra and finish the year in sixth position but the heavy schedule looks to have caught up with them and they simply may not be able to match their cross-town rivals at the offensive end.

Both teams will be playing the second game of a double-header when they meet on Sunday while this meeting could also be a Grand Final preview.

For the Lynx, that prospect may mean they play their cards close to their chest and either rest a couple of players or not quite show off everything they have planned for the post-season but Townsville’s situation is not as simple.

If they fall to Sydney Uni on Friday night, they will need a win here to keep their hopes of home court advantage in the Semi-Finals alive but a victory over the Flames will mean they have the same luxuries heading into this contest as Perth.

The Lynx have had the wood on Townsville this season, winning two previous meetings by an average margin of 12 points. With the chance to show they can compete with the current best team in the league as well as end their winning streak right before the finals, the Fire should have a lot to play for no matter the circumstances in front of a home crown on Sunday.

The 2017/18 regular season ends in Bendigo on New Year’s Eve with the Spirit desperate to give their fans one final reason to cheer after winning just three games at home this campaign.

Sydney Uni will not be taking this contest lightly though as a win on Friday night against Townsville would mean this contest would be for home court advantage in the Semi-Finals.

If they drop that game and are resigned to third place, the Flames will still be keen to get back on the winners side of the ledger before the playoffs begin and avoid entering the post-season on a losing streak.

Sydney Uni have dismantled the Spirit in two encounters this season, most recently winning by 33 points a fortnight ago when they shot 51% from the field while Jennifer Hamson controlled the paint with 18 points and ten rebounds.

Her work under the rim as well as the outside shooting of Alex Wilson are serious threats to Bendigo but with free entry for their last home game, the Spirit will be hoping for a big crowd to push them over the line.