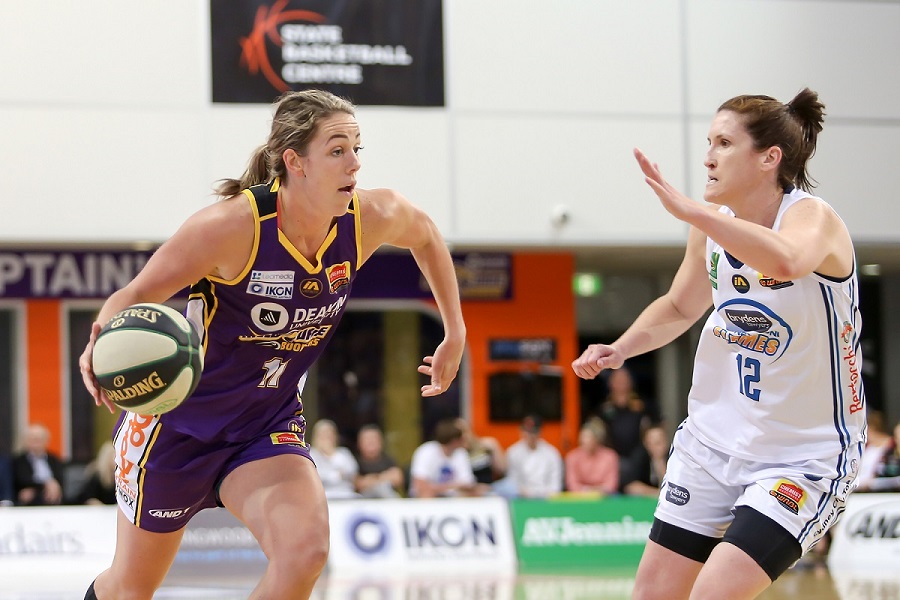 In a battle for first place against the UC Caps, Perth have prevailed and now sit clear on top of the ladder while Melbourne swept their way through Round 5 with victories over Sydney Uni and Townsville.

Claiming their first win at home of the season, Melbourne set up the victory with a 13-0 run into half-time before drilling six three-pointers in the third quarter. They finished with a league-high 17 three’s on the game as Cayla George (27 points, three steals, three blocks), Steph Talbot (20 points) and Jenna O’Hea (14 points, four assists) all hit four from beyond the arc while Maddie Garrick had nine points in her 200th game. Alex Bunton was again tireless for the Flames with 20 points and eight boards.

Cayla George, Boomers: “This is a really unselfish team and we are here looking to support each other. On any given night anyone can have a good game, but on this team multiple people can have statistically good games so I’m really enjoying that.”

Belinda Snell, Flames: “We gave up too many offensive rebounds, especially when we were playing a zone. We are good in patches at the moment, but we need to find consistency.”

Securing their spot on top of the ladder, Perth hit ten three-pointers as a team to hold off an incredible performance from Kelsey Griffin (30 points, 18 rebounds- ten offensive). Alison Schwagmeyer set the tone with 15 points in the first quarter before Brittany McPhee took over with 19 points while Asia Taylor (11 points, two steals) and Katie Ebzery (ten points, eight rebounds) also starred. Kia Nurse had 22 points for the visitors but aside from her and Griffin, the Caps shot just 6-31 (19%).

Andy Stewart, Lynx head coach: “We’re playing defence all the way through the shot clock and it’s fun to watch.”

Paul Goriss, Caps head coach: “[Griffin] can’t be the lone wolf, we’ve got to help her and we’ve got to have more people stepping up to play with her intensity. We can’t just take it as ‘that’s what Kelsey does’.”

The Lightning put on an offensive clinic against Dandenong, extending their lead at every break while shooting 57% from the field overall. Six players reached double-digits, led by Nia Coffey (21 points) and Lauren Nicholson (20 points on perfect 6-6 three-point shooting) while Nicole Seekamp finished with 17 points, seven rebounds and seven assists and Kayla Alexander had 14 points and eight boards off the bench. Only Bec Cole (27 points) offered resistance from the visitors.

Chris Lucas, Lightning head coach: “I asked for a response and they’ve done exactly that. Their work-rate at practice has been the best it’s been and we still have growth.”

The tale of both teams’ seasons was exemplified in this contest as Sydney Uni went to 0-5 in games decided by five points or less while Bendigo went to 3-1. Alex Wilson (16 points) looked like she had done enough down the stretch for the visitors, scoring nine points in the fourth quarter and Sarah Graham (nine points) then hit a fading three-pointer with 25 seconds left to tie the scores. Nadeen Payne (14 points) responded with the eventual game-winner though on a perfect cut to the basket before Becca Tobin (11 points, four assists, three steals) sealed the victory with an interception on the final play. Brittany Smart paced Sydney Uni with 17 points while Belinda Snell moved into fourth on the all-time scorers list with 13 points.

Simon Pritchard, Spirit head coach: “What the girls have shown is some resilience. Their defence in the fourth quarter from the five minute mark was fantastic.”

Karen Dalton, Flames: “That last two minutes we missed every shot or made a turnover when we had the ball. So close again.”

Using a 22-11 final term, the Boomers stayed unbeaten on the road for the 2018/19 season while exacting revenge on the Fire in the Grand Final replay. The victory was also Melbourne’s first in Townsville in four years as Lindsay Allen dominated with 29 points while Maddie Garrick had 17 and Sarah Boothe shot 7-7 from the field for 15 points off the bench. The reigning Champions had four players in double-figures but Suzy Batkovic played only 21 minutes with a sore neck as the Fire slumped to sixth on the ladder.

Claudia Brassard, Fire head coach: “[Batkovic] tried and I’m sure she wanted to stay out there, but clearly it wasn’t happening for her and she could barely move her neck. Hopefully she’ll be right to go by the weekend.”

Guy Molloy, Boomers head coach: “We are in the middle of six games in 16 days and sit 3-1 at the moment. The good news is that we just keep finding a way to win.”

Roy Ward of The Age was there for Melbourne’s win on Thursday night as they shot the lights out against Sydney Uni: https://www.theage.com.au/sport/basketball/boomers-shoot-back-into-form-with-three-point-clinic-against-flames-20181108-p50ewo.html

Amanda Lulham covered the other side of the contest for The Daily Telegraph: https://www.dailytelegraph.com.au/sport/basketball/wnbl-melbourne-boomers-beat-sydney-uni-flames-9679/news-story/bfab48ce90a6f29653b91db313baf52f

Ward also backed up to cover Melbourne’s second victory of the round for the Sydney Morning Herald: https://www.smh.com.au/sport/basketball/boomers-celebrate-a-rare-win-in-townsville-20181111-p50fdk.html

Reece Homfray reported on the Lightning’s big win over Dandenong on Saturday for the Adelaide Advertiser: https://www.adelaidenow.com.au/sport/basketball/adelaide-lightning-scores-season-high-99-points-in-big-win-over-dandenong/news-story/d8e41a137a4668e2d04fa57e6c908c3d

Trent Slatter revealed the extent of Batkovic’s injury for the Townsville Bulletin: https://www.townsvillebulletin.com.au/sport/suzy-batkovic-injured-as-townsville-fire-fall-to-melbourne-boomers-in-wnbl-grand-final-rematch/news-story/0e76256d68b84c2476ed51d1ad5b9312