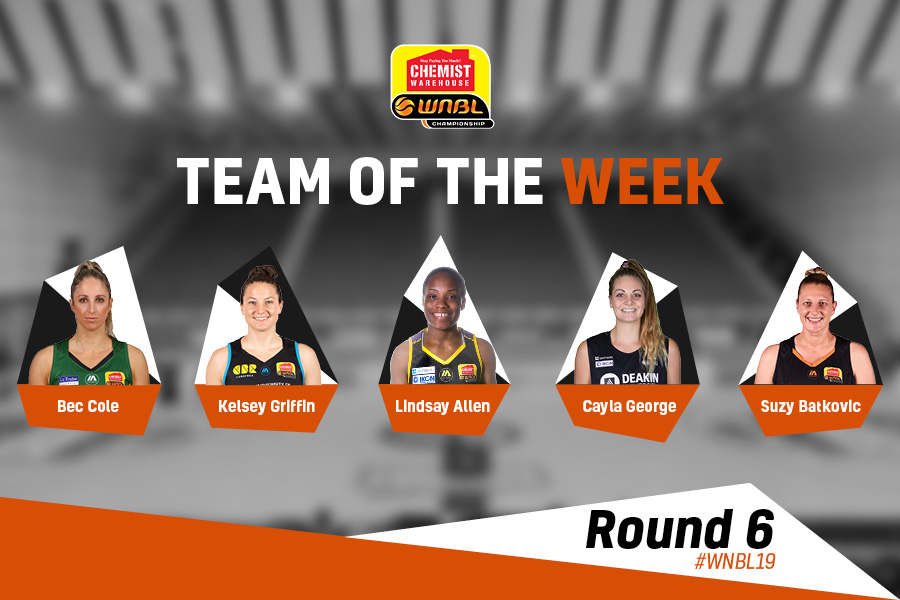 ROUND 6 TEAM OF THE WEEK

The Round 6 Team of the Week features some familiar faces as Lindsay Allen and Kelsey Griffin return after being named in the Round 5 honours. Suzy Batkovic has clocked up her third nod for the season, Bec Cole continues her career-best year with her second inclusion and the Deakin Melbourne Boomers boast two players with Cayla George joining Allen.

Lindsay Allen has been named the WNBL Player of the Week for the second week in a row and was instrumental across two wins for the Boomers, averaging 23.5 points and 5.5 assists.

Melbourne faced possibly their toughest challenge of the season on Friday night as they travelled to Perth who were riding a six-game winning streak.

Allen began the game with a bang, scoring 12 points in the first quarter as the Boomers jumped out to a 31-22 lead and from there, she led the team to a 20-point victory with 26 points, five rebounds and five assists.

On Sunday, Allen again led her team to a hard-fought win over Townsville. Helping her side push out to a 19-point lead during the third period, the Boomers still had to withstand a fight-back from the Fire who tied the game with 38 seconds remaining. However, Allen stood in their way as she set up Kalani Purcell with the go-ahead basket while finishing with 21 points, seven rebounds and six assists in another impressive display.

After recovering from neck soreness in Round 5, Batkovic made her return this weekend and starred in a gritty two-point road win over the Lightning and a near comeback against Melbourne.

As Batkovic has done so many times before, she stepped up when her team needed her. Trailing by ten points at half-time against Adelaide, she scored 18 second half points including 3-4 shooting from beyond the arc to will her team back into the contest.

In the end it took a Tess Madgen three-pointer to get the Fire over the line but Batkovic stuffed the stat-sheet with 26 points, 14 rebounds, seven assists and three blocks.

On Sunday, when the Fire faced the Boomers at the State Basketball Centre, Townsville were facing a similar predicament.

Half-way through the third period the Fire trailed 38-57 before they fought all the way back, drawing even with just 38 seconds remaining.

Unfortunately for Batkovic and Townsville, they were unable to match the heroics of Friday night as the Boomers prevailed but Batkovic still finished with 12 points, 14 rebounds, two assists and two steals.

Having enjoyed a career-best season with her new team, Cole continued her strong form in Round 6 for the Rangers.

Coming into Friday night’s match-up against the Spirit, the league’s bottom ranked defence was set to play the league’s best defence but Dandenong flipped the script as they locked down Bendigo all night, dominating the game to win by 16 points.

Dandenong then had to back up on Sunday for a game against the UC Capitals. The Caps jumped the Rangers early, opening up a sizeable half-time advantage which they would not relinquish but Cole still top-scored for the Rangers with 16 points as she displayed her ability to attack the ring by taking seven trips to the line where she shot 100%.

Cayla George enjoyed a fantastic weekend for the Boomers, helping her team to two wins including a victory over her old side.

Missing Steph Talbot and Ezi Magbegor, George has had an increased role in the front court over the last few weeks and she put up 16 points and nine rebounds as Melbourne got the better of the ladder-leading Lynx.

She then faced her old team in Townsville for the second time in a week as helped contain Batkovic to 6-16 shooting while posting a double-double herself of 17 points, ten rebounds, three assists and three blocks.

Griffin picked up where she left off last weekend, tallying 25 points and eight rebounds in a win over the Rangers.

She scored 21 points in the first half and 15 in the second period, giving the Caps an insurmountable 18-point lead at the main break before going on to shoot 10-14 from the field.

Now averaging 19.3 points, 11.8 rebounds and 2.3 assists per game, Griffin has been named in four WNBL Team of the Week’s which is a league-high.

Kelsey Griffin Round 6 Stats: 25 points on 10-14 shooting, 8 rebounds, two assists and one block.