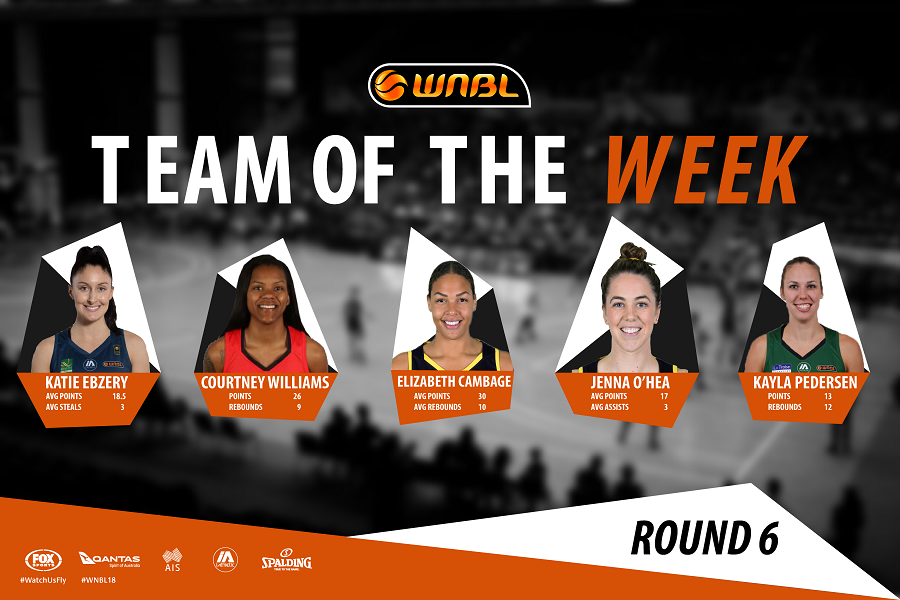 ROUND 6 TEAM OF THE WEEK

After earning the Player of the Week award for the third time this season, Liz Cambage of the Deakin Melbourne Boomers has been named in her fourth Team of the Week over the past five weeks.

She is joined by team mate Jenna O’Hea who made a welcome return to the club from a calf injury, averaging 17 points, 2.5 rebounds and three assists including a clash against Sydney Uni when she knocked down 6-8 from the three-point line.

While the Brydens Sydney Uni Flames split their weekend, Katie Ebzery led the team with aplomb, averaging 18.5 points, 4.5 rebounds, five assists and three steals to earn a spot in her second Team of the Week.

Perth Lynx’s Courtney Williams has made her debut after a stirring performance in the fourth quarter to defeat the Caps, shooting 6-6 down the stretch to tally 26 points, nine rebounds, two assists and three steals and bring the Lynx to a 4-4 record.

Rounding out the side is Kayla Pedersen from the Jayco Dandenong Rangers who starred in a narrow loss to Adelaide, recording her fifth double-double of the season with 13 points, 12 rebounds, six assists and two steals.