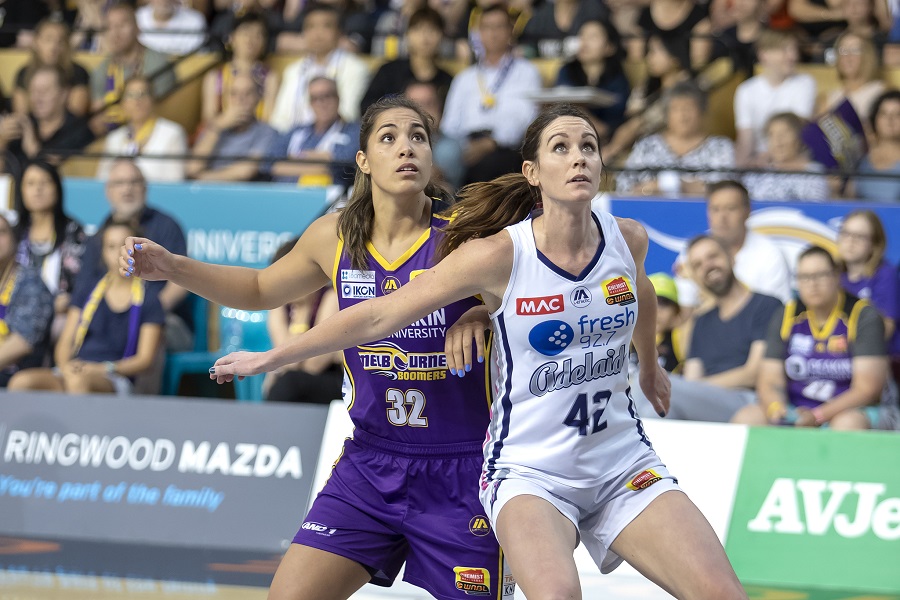 The Lightning put the clamps on the Boomers on Sunday evening, holding them to their second lowest score of 2018/19.

The visitors were exceptional after half-time, restricting Melbourne to 25 second-half points, including just twelve in the last quarter to run out 16-point victors.

Only one starter reached double-figures in scoring with Allen tallying 12 points but it took her 17 shots as the Lightning back court suffocated the play-maker.

For Adelaide, Nicole Seekamp was highly efficient at both ends and finished with 18 points, six assists and four steals, Steph Blicavs hit 3-5 from distance for nine points and Lauren Nicholson overcame a broken nose suffered last week to register ten points and four steals while helping to contain Allen and Steph Talbot.

“(Nicholson) is one tough individual and she’s fun to coach. She’s got great character, and she works her butt off,” said Chris Lucas post-game.

While the win was a massive result for the Lightning, they did have cause for concern as Nia Coffey left the contest walking gingerly in the third period following a rebounding contest with Lindsay Allen. From Melbourne’s perspective, a terribly inefficient offensive display left coach Guy Molloy with much to ponder.

“22 turnovers and 11% from three in a playoff game is not exactly a winning formula,” he rued.

Coming into the series, Melbourne was the most prolific team from beyond the arc, having hit 16 more triples than the next best team.

“It’s uncharacteristic of this team to shoot that badly…. I’ve got great faith in our team,” said Molloy.

“I know that sort of a shooting night is an outlier for our team, and in a sense, that’s kind of okay… because we won’t shoot that badly again.” They also recorded 22 turnovers, gifting Adelaide 23 points in the process.

Lightning fans will be hoping Coffey’s absence in the fourth quarter on Sunday was simply precautionary and that she will be right to go on Thursday night.

Coffey was instrumental in the Lightning’s third-quarter run, recording 16 points and eight rebounds overall in only 26 minutes of action.

Adelaide will also be wary of Melbourne’s ability to turn their three-point shooting on quickly and it will be interesting to see if the Boomers look to go inside more often and attack the likes of Kayla Alexander at the rim.

–Adelaide have beaten every team in the WNBL in each of their most recent match-ups.

–Nicole Seekamp leads the league in steals per game, with 2.4.

–Melbourne have not lost two games in a row since the opening two games of the season.

After the Lightning shut down the Boomers on Sunday evening, Adelaide now head home with a chance to close out the series and make the Grand-Final for the first time since 2008.

However, Melbourne will have no fear about hitting the road where they have an 8-2 record this season.

“I have confidence in our away record, we’ve been a lot better away than we have at home,” said Boomers captain Jenna O’Hea.

“I don’t think we’re going to shoot like that two games in a row, I think that we’re a very tough team to beat in a three-game series.” With the Boomers boasting so much fire-power, it appears unlikely that Melbourne will have a repeat performance on the offensive end in Thursday night’s match-up and Maddie Garrick could be a barometer for the side after she went scoreless in 19 minutes in Game 1.

If Coffey is healthy, she will again cause headaches for the Boomers alongside Kayla Alexander but the back-court is where the series will be won and lost.

The defensive performance of Seekamp and Nicholson will be crucial and without an effective game from Allen and Steph Talbot, Melbourne will find themselves out of the finals race in a hurry.