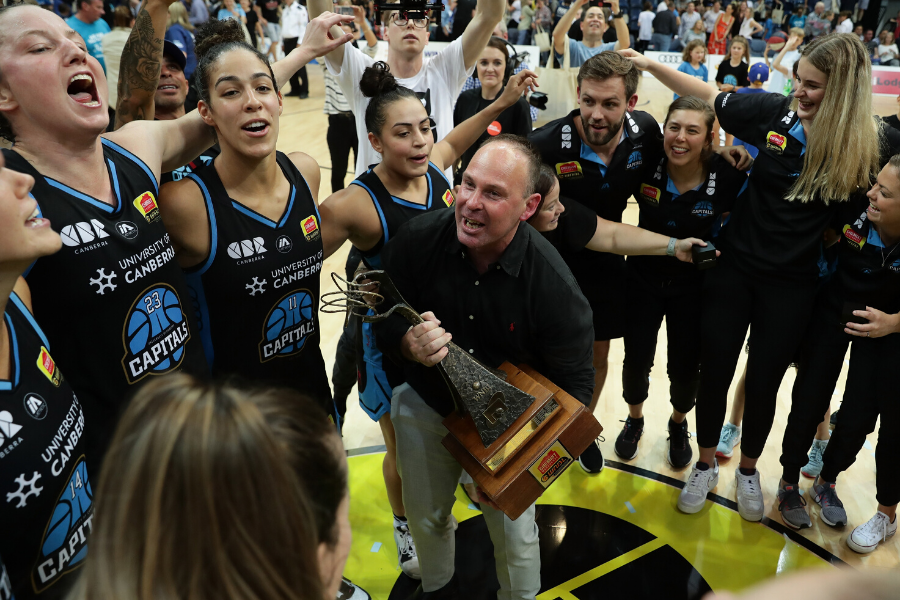 #WNBL20, A SEASON IN REFLECTION

The historic Chemist Warehouse WNBL20 season has come to a close with the UC Capitals claiming the championship over the Jayco Southside Flyers in an intense two games of the Grand Final series.

The Capitals, now with nine championships to their name, claimed their second consecutive title along with three other awards this season. Canberra also had their head coach Paul Goriss named as the WNBL Coach of the Year while their star import Kia Nurse was named to the WNBL All-Star First Team and was awarded this season’s MVP, marking the first time in the league’s 40 year history an import player has claimed the award.

League records were also broken, with Bendigo’s Kelly Wilson setting a new all-time games played record with 395 games and Adelaide’s Nicole Seekamp recording 20 assists in a game, the most ever for an individual match.

The Jayco Southside Flyers had an impressive WNBL20 campaign with a league-best 17-4 regular season record and a trip to the Grand Finals. Flyers captain Jenna O’Hea had a fantastic season until a wrist injury saw her sitting and cheering on her teammates from the bench. However, her determination saw her return to the court in the Grand Final Series with an impressive 14 points and six rebounds in game one.

The Melbourne Boomers had a number of significant achievements this season with two of their playing squad, Cayla George and Toni Farnworth, along with and head coach Guy Molloy, being inducted as WNBL life members after reaching 250 games in the league. The Boomers, despite seeing starting point guard Lindsay Allen injured in the latter half of the season, managed to push the Caps to a third game in the Semi Final Series. Melbourne star Ezi Magbegor had a standout year winning the WNBL’s Youth Player of the Season.

The Adelaide Lightning had a promising season and gave the Flyers tough competition in the Semi Final Series. Star import Brianna Turner was a force on the boards, finishing with a league-leading total of 247 rebounds (10.7 avg per game). Turner was also strong on the scoreboard with the league’s fifth highest point total for the season at 387 points and the second-best points-per-game average (16.8). Nicole Seekamp also led the league in total assists with 176 and average assists per game (8.0).

Whilst their season ended at the close of round 16, Perth Lynx had a number of bright spots in their season with star player Alison Schwagmeyer-Belger being named as the WNBL’s Sixth Woman of the Year. Perth’s Katie Ebzery was named to the All-Star First team after finishing the season with 342 points scored and a 16.3 points per game average. Maddison Allen also had a strong season defensively, finishing with 1.8 blocks per game.

The Sydney Uni Flames’ new head coach Katrina Hibbert had an impressive first season at the helm. Their star, Alice Kunek, earned WNBL All-Star Second team honours after posting an average of 18.9 points per game (3rd best in the league) and playing an average of 35.7 minutes per game, second in the WNBL. The Flames newest import Jess Kuster was also influential in their season, shooting at over 53.1% from the field. With the end of their season also came the farewell of captain Sarah Graham, who announced her retirement after 12 WNBL seasons.

Despite finishing on the lower end of the ladder, both the Bendigo Spirit and JCU Townsville Fire have reason to be optimistic about their respective futures.

The Spirit defeated this season’s champion Capitals in round 12 by four points and finished the regular season second in the league in three-pointers (191 points). Kelly Wilson finished the season with 5.8 assists per game, good for third in the WNBL, whilst Rebecca Tobin grabbed an average of 10 boards per game.

For the Fire, Darcee Garbin finished the season with a team-leading total of 302 points and 133 rebounds whilst Julie Vanloo had 93 assists and 39 points from beyond the arc. Abby Bishop also contributed 2.1 steals per game, good for third best in the league.

The WNBL is proud to celebrate and reflect on the calibre of players and talent seen in this 2019/20 Season and we can’t wait to see what next season brings. #WeAreWNBL