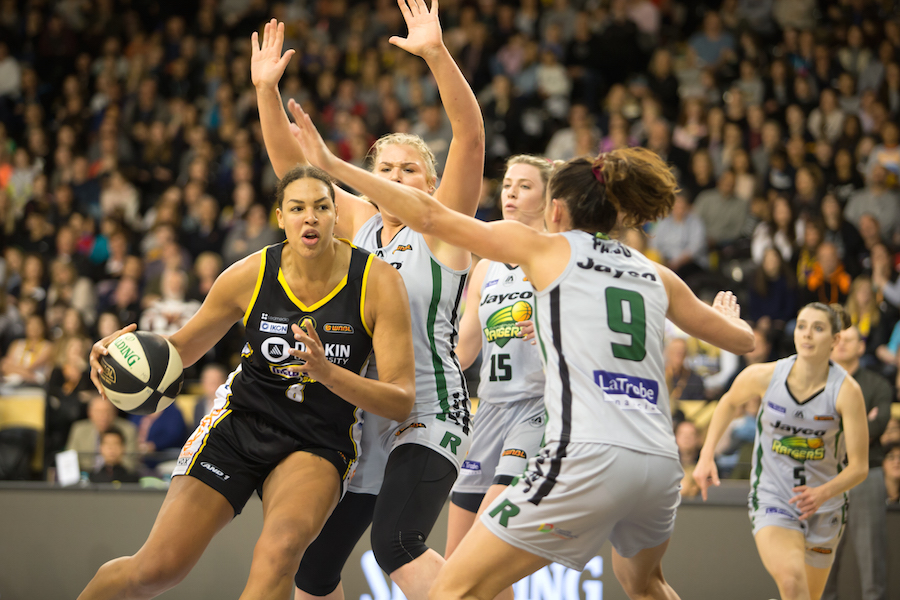 In front of a packed-out State Basketball Centre, the Deakin Melbourne Boomers have roared home against the Dandenong Rangers to claim the Melbourne Cup Eve Derby and re-take the Michele Timms Cup for the first time in four years, 60-57.

The match went down to the wire, with star Liz Cambage only managing to seal the deal for the Boomers in the final seconds with a turnaround jump shot.

Cambage played a key role for the depleted Boomers side throughout the match, particularly in the final term, finishing the pulsing contest with 27 points and seven rebounds.

The win was hard fought for the Boomers side, trailing the Rangers for all but the final two minutes. Theme team edged in front when it most mattered.

Dandenong snapped up the lead early on, pushing themselves up to a 13-point buffer before the end of the half. During the third period the visitors led by as much as 15pts, seemingly on their way to victory.

Family duo Sara and Steph Blicavs proved lethal on the court for Dandenong in the first half. Coupled with Carley Mijovic and Kayla Pederson, Dandenong was able to take what looked like an unassailable hold on the game.

At the end of the half the Boomers trailed 21-32, needing a strong second half to recover the deficit.

With the gap still in double figures after the third period, Melbourne put their foot on the gas in the final term. Upping their defensive pressure to slowly chip away at the Rangers lead.

With only 39 seconds to play, a 3pt jump shot from Britt Smart set the stadium alight, propelling the Boomers four points into the lead.

The Rangers were quick to respond with 3pts of their own from Spanish star Laia Palau. However, Cambage wasn’t having any of it, putting up a quick two points followed by a block to see the Boomers through to the final buzzer.

Coach Guy Molloy said that the tough coverage from Dandenong proved difficult for the home side.

“I can’t say much of the game went to plan, and there was a bit of ad-libbing there as we went along. But, I’ve got nothing but credit for our team.”