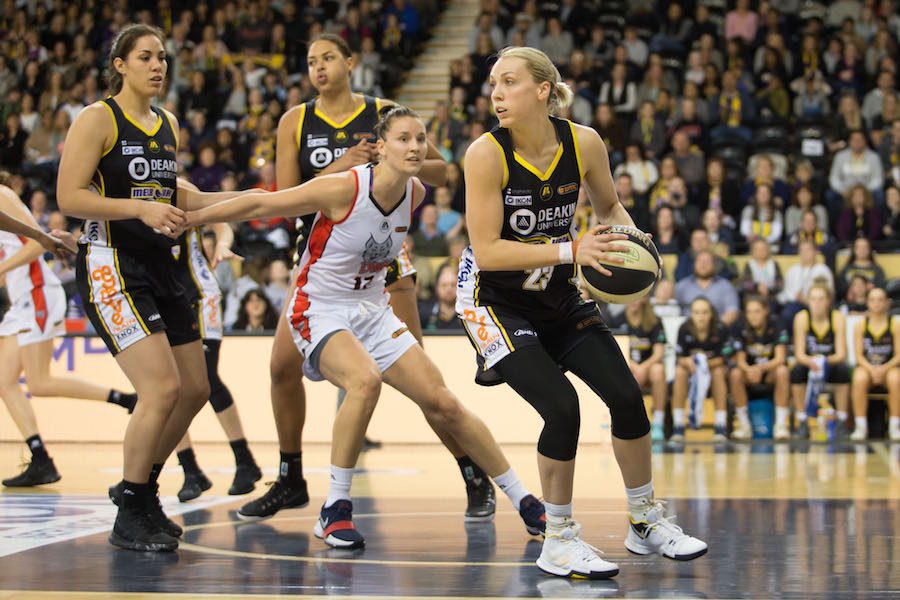 Despite missing several key players, the Deakin Melbourne Boomers have stepped up to the plate in an intense and physical match to grab a win from under the Perth Lynx, 79-77.

Liz Cambage played a pivotal role in the Boomers win. Cambage sent the match into overtime with a big block on Perth’s Kayla Standish, before putting four points on the board immediately to put the Boomers in good stead.

Bec Cole was able to make a clutch free throw, before Maddie Garrick and Kalani Purcell combined to pressure Courtney Williams as the clock expired.

It was clear from the opening tip that the match would go the distance, with both sides going point for point through the first term.

Maddie Garrick was key in swinging the momentum to the Boomers favour late in the second quarter. A quick three points spurred a succession of Boomers attacks from Monique Conti, Kalani Purcell and Britt Smart. The Boomers took a 45-40 lead heading into the main break.

The Boomers came out of the half hot, storming to an 11-point lead mid-way through the 3rd term. However, they were unable to keep the Lynx at a distance with ex-Boomers captain Alice Kunek, alongside Standish and Williams, working to chip away at the Boomers advantage.

Sami Whitcomb, who had been a force for the Lynx all night, put her foot on the gas in the final term. The Lynx snuck out to a seven point lead at one stage, before the Boomers were able to reign them back in. The two teams went point for point all the way to the final buzzer, before an outstanding block from Cambage effectively sent the match into overtime.

Despite a resilient Whitcomb, the Boomers were able to secure to a lead thanks to a quick four points from Cambage. However, Cambage did not last the night, fouling out in the overtime period.

The Boomers were able to get the job done without Cambage, thanks to a team effort, hustling on the defensive end. The clock expired with the Boomers taking the win 79-77.

Coach Guy Molloy said he thought the team’s discipline and defence late in the fourth term and overtime against such a potent offensive side was crucial in securing their win.

“[We] just got a bit ambitious with our decision making and turning it over in the second half which we hadn’t been doing and yeah that was probably the only black mark on the game,” said Molloy.

“But I’m really pleased with the way we fought back and pushed ourselves to an important win.”

The Boomers now turn their attention to their first full weekend on the road, as they take on Sydney Uni Flames and Townsville Fire next round.

The Boomers will be back at home for the league’s biggest game of the season, the Cup Ever Derby against Dandenong. You can get your tickets HERE.