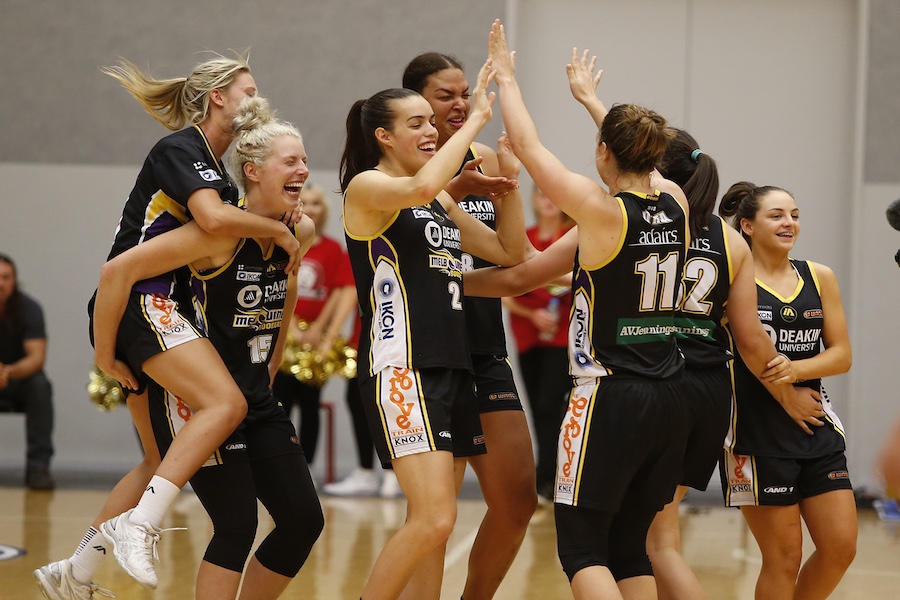 Boomers through to WNBL grand final

For the first time since 2011, the Deakin Melbourne Boomers are headed to the WNBL Grand Final after making a clean sweep of the Perth Lynx in their Semi-Final Series.

Backing up their 92-76 win in their first semi-final on Wednesday, the Boomers were pushed to their limits by the Lynx in their second-game blockbuster, before emerging victorious, 69-78.

A fourth quarter comeback driven by Bec Cole and Liz Cambage proved key in the Boomers win, with both stars effectively defending against crucial Perth shooters Sami Whitcomb and Courtney Williams to give the Boomers the chance to make their run at the series.

Carrying the fiery passion from Wednesday night’s victory, the Boomers put their best game on the court, with plenty of effective trademark ball movement and communication to keep them in touch during a close close contest through all four quarters.

Jenna O’Hea put forward a captain’s game through the entire 40 minutes, supporting her team all over the court to finish with 12pts, 6rbs and 5ast. When joined by Cambage around the basket (25pts, 15rbs) and Garrick at range (18pts, 5rbs), the Boomers proved themselves to be a tough match for the Lynx.

However, it was the defence that was the star of the show. Kalani Purcell (6rbs, 6ast, 2stls, 2blks), Ash Grant (4rbs, 1ast) and Britt Smart (7pts, 4rbs, 1ast) all continued to build on the defensive rhythm from Wednesday night and capitalise on Perth’s mistakes inside the paint.

In the fourth quarter the Boomers defensive prowess really shone through, with a complete team effort effectively locking down prolific Perth scorers Courtney Williams (20pts) Sami Whitcomb (15pts) to give the Boomers a 30-16 quarter, and ultimately the win.

“We put a game plan in place and it was pleasing to see the team work hard to implement it,” said Coach Guy Molloy, adding “I’m very proud of the team, it’s a great reward for the club to be in the grand final, but our job isn’t done yet.”

“We’ll get straight back to work and prepare for either Townsville or Sydney.”

The Melbourne Boomers now must wait for the results of the second semi-final between the Fire and the Flames to find out who they will be facing in the Grand Final Series.

Tickets to the Deakin Melbourne Boomers Home Grand Final will be available online from Tuesday January 9 at www.trybooking.com/BOOMERS.