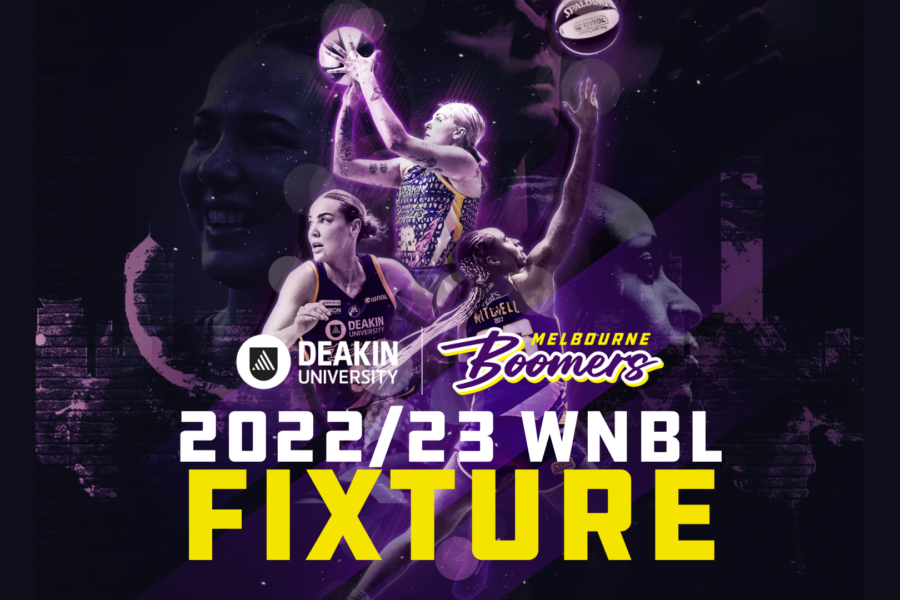 The Deakin Melbourne Boomers will look to defend their WNBL Championship in season 2022/23 and it all starts on November 2 in a blockbuster Grand Final re-match against the Lynx in Perth.

The last time Melbourne played in Perth was Game 2 of the 2022 Grand Final series which ended in one of the most memorable – and important – victories in Boomers’ history; a thrilling one-point win, 76-75, which the team would then back up with a dominant win at home to clinch the Championship in Game 3.

In a season where the Boomers will be looking to make it back-to-back titles, there are tantalising matchups at every turn, including 10 Boomer home games, the Melbourne derby at the State Basketball Centre against Southside in Round 2, the unveiling of the Championship banner at the home-opener, the traditional Christmas game at the State Basketball Centre, and much, much more!

In a massive win for Boomers members and fans, there will be six Parkville home games at the family-friendly time of Sunday afternoon.

With the Boomers boasting a roster Opals’ Cayla George, Tess Madgen and Kristy Wallace, alongside WNBA star Tiffany Mitchell, this season promises to be full of highlight plays and not-to-be-missed moments.

The Boomer faithful will be out in force for the home-opener against Adelaide at Parkville on Sunday November 13 and you won’t want to a miss a second of the action in what is sure to be a memorable day. The 2022 Championship banner will be unveiled as we celebrate last season, before turning attention to the Lightning in Chris Lucas’ first game against his former team.

This will also be the first chance for Boomer fans to see Kristy Wallace suit up for Melbourne in a home game. Speaking of Wallace, a mid-week Melbourne derby will kick off Round 2 which will see Wallace face her former team for the first time when the Boomers take on the Flyers at the State Basketball Centre on Wednesday November 9.

Two Sunday afternoon home games against the Canberra Capitals and Townsville Fire in Rounds 3 and 5, respectively, shape up as being great contests, while the traditional Christmas Game returns in 2022 with another enticing battle against Adelaide on Thursday December 22 at the State Basketball Centre. There will be plenty of Bertocchi hams to giveaway to get those in attendance into the Christmas spirit!

A New Year’s Eve clash in Townsville against the Fire will round out 2022 and when 2023 rolls around, there will be basketball galore for Boomers fans in Victoria, with five home games in the first five weeks of the year. And it all starts with home derby against Flyers, this time at Parkville on Wednesday January 4.

The Boomers travel to Gippsland to take on the Canberra Capitals and Traralgon local Jade Melbourne – a rising star of Australian basketball – on Saturday January 14. It’s always a great trip for the Boomers to get out in the Gippsland community and this year will be no different.

Three Sunday afternoon home games in a row at Parkville will ensure rivalries are renewed once again. Facing Bendigo, led by reigning WNBL MVP Anneli Maley, in Round 11 and again in Round 13 will be a spectacle and those games are separated by a Grand Final replay against Perth in Round 12.

The Boomers hit the road in mid-February with four games in 10 days. At the pointy end of the season, these games – against Townsville, Sydney Uni, Southside and Canberra – are sure to be important games as teams jostle for post-season positioning.

Melbourne then returns home for the final game of the regular season against Sydney on Sunday March 5.

The road to defending the Championship is set and while it certainly won’t be an easy mission, this Boomers squad is ready for the challenge and are Back to BOOM for the WNBL 22/23 season. Be there every step for the way and support your team, Melbourne!