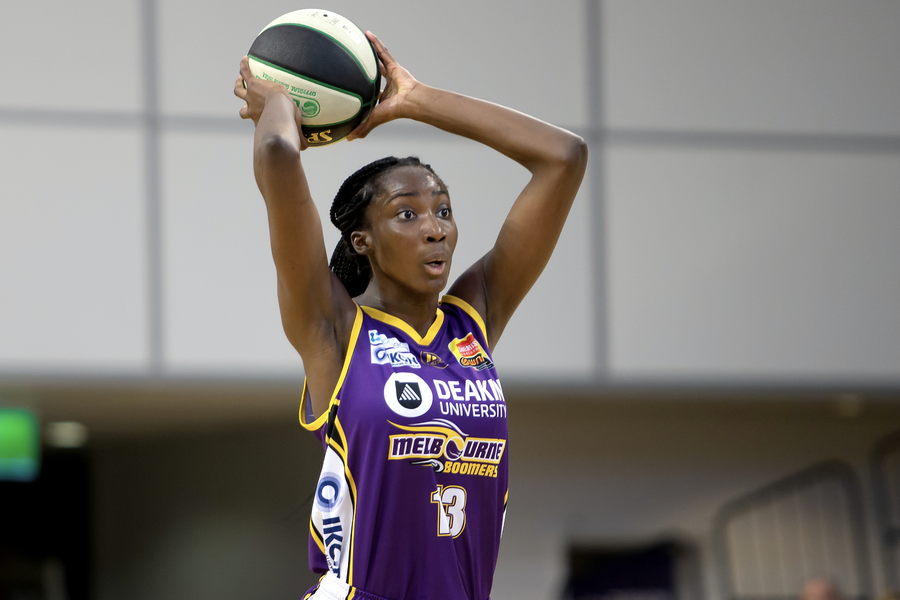 Ezi Magbegor Strikes in Round 13 Team of the Week

For the first time this season, Ezi Magbegor has been named in the WNBL Team of the Week after an impressive Round 13 in a nail-biting win against the Perth Lynx.

The Deakin Melbourne Boomers played only one game in the round, but it was one of the biggest match-ups of the season with a top-four clash against Perth.

With captain Jenna O’Hea absent from the clash, Magbegor rose to the occasion producing a season-best performance at the Boomers final home game of the regular season.

Magbegor led the Boomers to a 5-point victory over Perth, top-scoring for the game with 17 points in 21 minutes, on 8-13 shooting. The centre added six rebounds and a block while scoring four points down the stretch.

Boomers coach Guy Molloy said the youngster took control of the match to play a pivotal role in the win.

“Ezi showed why I think she’s one of the big future stars of Australian basketball, and we’re really pleased she had such a good game,” said Molloy.

In her debut season with the Boomers, Magbegor has endured a frustrating campaign after she sustained a hand injury that kept her sidelined for several weeks. Magbegor averaged 12 points a game before her injury which saw her miss six games of the season – not making her return back to the team until Round 7.

Magbegor is considered one of the elite teenagers in women’s basketball and was the first Australian to receive a scholarship offer from US college University of Connecticut – the number one side in women’s college basketball.

Her passion for basketball began in U/8s, where she played on a mixed team with her older brother before attending the Australian Institute of Sport in Canberra for three years during her teens.

The 193cm forward has previously starred on the junior international scene and earned the WNBL’s Rookie of the Year in 17/18. She has also represented the nation on the big stage, named as a bolter in the Australian squad. Magbegor made her Opals debut in the 2018 Commonwealth Games before playing at the FIBA Women’s World Championships last September.

They’ll be plenty more opportunities to see Magbegor in action with three games remaining in the regular season before the Boomers take on WNBL Finals.