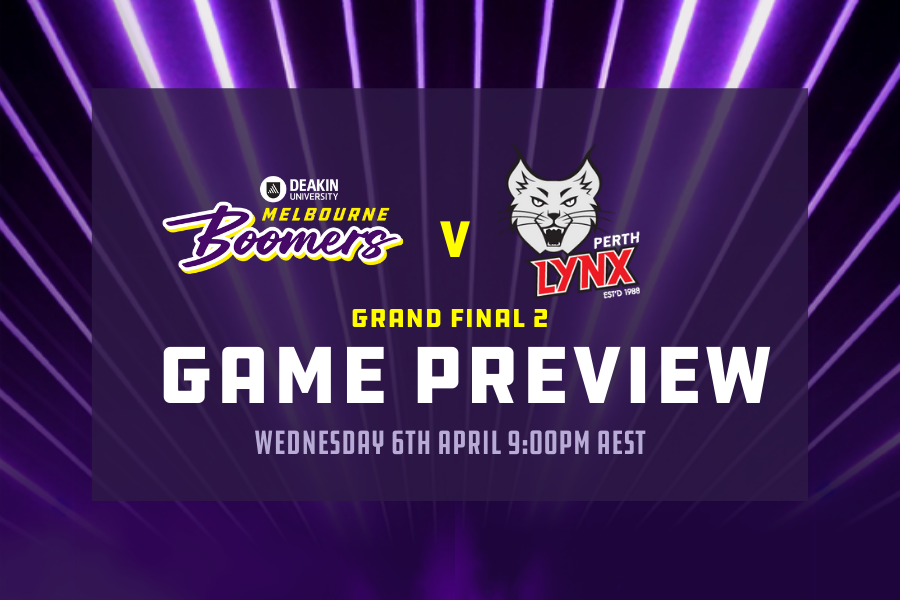 The Deakin Melbourne Boomers will come up against Perth Lynx for the second game of the Grand Final series this Wednesday 6th of April at 9:00pm AEST.

The Boomers will be on the road to Perth with the second game of the series taking place at the oppositions home court – Bendat Basketball Centre.

Lynx took the first win of the Grand Finals series, with a strong performance across the breadth of the court, 98 – 71. The Boomers couldn’t find their edge and rhythm to take control of the momentum – misfiring and struggling to break the evenly matched Lynx defence.

Despite the loss, the Boomers showed glimpses of the fire they have shown us all season. Lindsay Allen performed with determination as she broke the Perth defence, entering the paint on numerous occasions.

Tiffany Mitchell ignited the Boomers with her explosive drives and hitting from beyond the arc, ending the night with 17 points, four rebounds and two steals. Ezi Magbegor showed what she can do inside the key, making strong drives, blocks, and capitalising on rebound opportunities, finishing with 14 points and six rebounds.

Perth Lynx flexed their lethal shooting accuracy as Marina Mabrey, Darcee Garbin and Sami Whitcomb all got on the board with their three-pointers. Garbin could not miss from beyond the arc, finishing with a game high 25 points.

Jackie Young was explosive in transition and capitalised at crucial moments for her team, ending with 21 points. Lauren Scherf proved to be dangerous inside the key with 12 rebounds, with eight of the 12 in defence.

The Boomers will be fired up and out for redemption, as they enter the must-win second game of the series – with more on the line than in any time in the last few years.

Increased ball movement, communication in offence, and inside looks will be crucial in converting their shots.

The team must continue their regular season form in securing themselves second chance opportunities. If the shots aren’t dropping, capitalising on offensive rebounds will be critical to putting scoreboard pressure on the Lynx.

The Boomers will have to come out hungry for the ball and maintain their laser-focus throughout the duration of the game – turning the hostile energy in the arena around to fuel them. Getting rattled will not be an option.

The Boomers will reignite their fire and will be hungry to fight their way back into this Grand Finals series.

We are still very much in this battle. It all comes down to this – We are Fearless for Finals.

You can watch all the action on ABC iView, Fox Sports, and Kayo at 9:00pm TODAY.