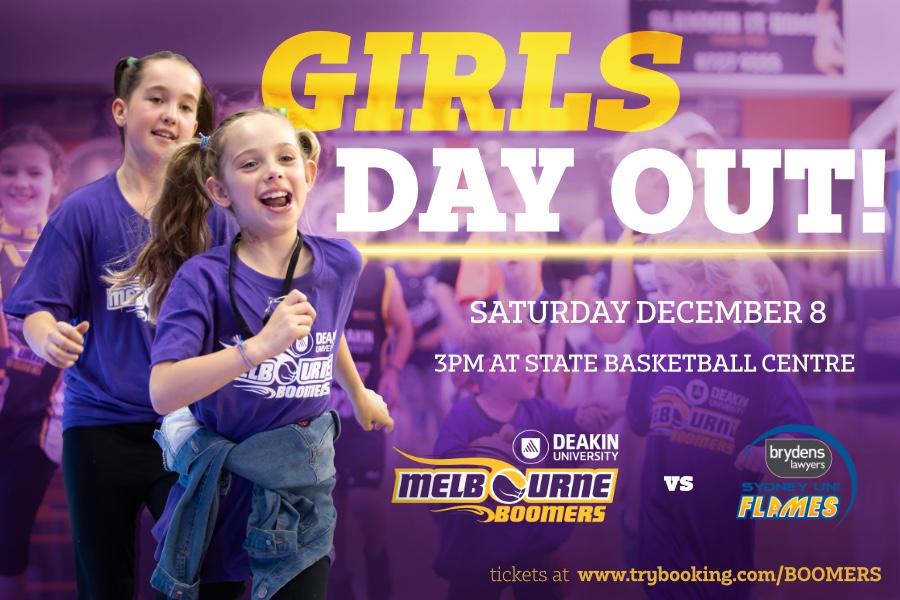 Ultimate Game Guide: Boomers vs Flames This Saturday At 3pm

THE DEAKIN MELBOURNE BOOMERS will host the Sydney Uni Flames for the Girls Day Out game this Saturday at the State Basketball Centre from 3pm.

Proudly presented by Adairs, Girls Day Out is a new home theme introduced by the Boomers this season. The day is focussed on promoting a fun and enjoyable basketball experience for all girls and women.

Boomers fans are encouraged to invite someone close to them – mums, daughters, sisters, grandmas, aunties, best friends, girlfriends and teammates to come along and enjoy a great afternoon of entertainment.

The Boomers have already beaten the Flames twice this season and will be looking to get another win in their final match-up this year.

Tip-off is at 3pm and General Admission tickets are available to purchase at the door from 1pm, while Reserved Seats can be booked online.

Following four victories in the last five games, including most recent back-to-back wins, the Boomers now sit second on the 18/19 Chemist Warehouse WNBL ladder at 9-4.

WHAT: Girls Day Out

TICKETS: General Admission at the door or Reserved Seating can be purchased online HERE.

BROADCAST: The game will be televised live by Fox Sports and SBS.

With a series of home games around the corner, it’s the perfect time to join the Boomers family – especially with our three-game memberships! You can purchase memberships online or sign up at the game from 1pm until half an hour after the game.

Girls Day Out is encouraging all Clubs & Associations to join in on the game-day action through our group booking option that offers great discounts on tickets.

Stock up on the new-season Boomers merchandise at the Club’s online store or at the venue from 1pm until half an hour after the game.

Cayla George: For the second time this season, George has been selected in the Team of the Week. George was a major contributor in the Boomers win in Round 8 as she ended with 11pts, 8rbs, 6asts and 5stls.

Kalani Purcell: Purcell has continued to provide an important element to the Boomers line-up through her defensive role, totalling 39 defensive rebounds for the season so far.

Brittany Smart: Smart was named as the WNBL Round 8 Player of the Week after leading the Flames to their first win of season. Smart was a critical contributor for the Flames finishing with 22pts and 7asts which led to 18pts.

Belinda Snell: Although missing out on the five, Snell received an honourable mention in the WNBL Team of the Week. In the Flames victory she finished with 4asts, 7rebs and 11pts.

Come on court and meet the team – all the Boomers players will stay on court for up to 45 minutes post-game with thanks to ANZ! Dexter the mascot will also be there to say hello!

The Boomers have 81 partnering grassroots clubs and associations supporting the team in the WNBL 2018/19 season. Those featuring in Saturday afternoon’s game include;

At the game? Tag us in your favourite basketball photos using the hashtags #BoomersFamily and #GirlsDayOut

The game is being televised live by Fox Sports and SBS.

Following Girls Day Out, the Boomers will host the Adelaide Lightning for our Volunteers Day game at the SBC (Sunday Dec 16, 3pm).