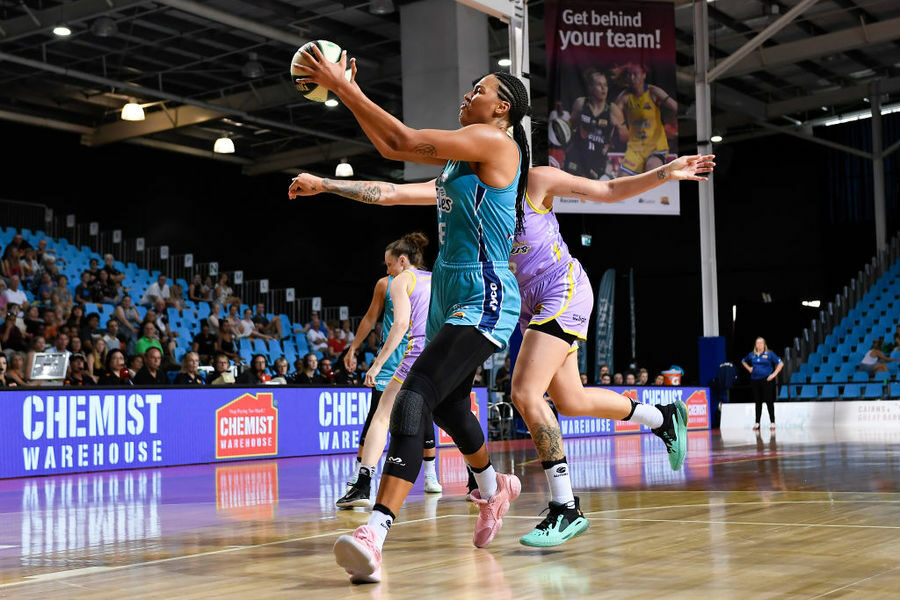 Can anyone stop Liz Cambage in the 2020 Chemist Warehouse WNBL?

That still remains to be seen after the Chemist Warehouse Opals superstar produced her devastating best to inspire the Jayco Southside Flyers’ 94-79 win over fierce rivals Deakin Melbourne Boomers in Cairns on Sunday.

A fired up Cambage grabbed 35 points, seven rebounds and four blocks as the Flyers (9-2 record) stormed to their fifth straight win and the top of the table with the finals in sight.

There is never any love lost between the Melbourne foes at the best of times.

But their rivalry went up a notch after the Boomers pulled off a shock 17-point first round win over title favourite Flyers last month.

The Flyers were clearly hungry for revenge on Sunday in what was a high quality and at times brutally physical affair at Cairns Pop-Up Arena.

And leading the way was Cambage.

She looked like a woman possessed at times, time and again punching her chest in jubilation after yet another hard-earned bucket to fire up her team in a contest that lived up to its blockbuster billing.

Cambage went toe to toe with Boomers rivals and fellow Opals Cayla George (12 points, 10 rebounds) and Ezi Magbegor (20 points) in a showdown worth the price of admission alone.

In the end it was Cambage standing tall as the Flyers pulled off their best victory of the season and snapped the Boomers’ four-game winning streak.

“She is the best big in the world. She is unstoppable,” Flyers and Opals teammate Sara Blicavs said.

The victory may also prove crucial to the Flyers earning a top two regular season finish and finals double chance, with the Boomers and two-time defending champions UC Capitals also vying for spots.

It was impressive stuff from the Flyers who had to play without two-time Olympian and key bench player Rachel Jarry (knee) who is aiming for a finals return.

“It is the Melbourne rivalry, it is like this every time we play them,” Blicavs said.

“It is physical, it’s intense and everyone wants to win so it is nice to get that win on the board.”

The Boomers (7-3 record) were backing up from Saturday’s 32-point win over Villawood Properties Bendigo Spirit and were playing their fourth game in six days.

“A lot of teams have had double-headers, but this was our first one,” Magbegor said.

“We had tired legs, but we came out here today wanting to give it everything.

“While it is disappointing to get the loss, we need to bounce back quickly.”

The Boomers next play Adelaide Lightning in Cairns on Tuesday while the Flyers face Brydens Sydney Uni Flames in Townsville on Thursday.

The return of Maddie Garrick (Achilles) helped the Boomers trade early blows before the Flyers grabbed a 22-21 lead at the first break.

Superior shooting and a rampant Cambage who had 18 points by halftime, helped the Flyers lead 42-33 at the main break and 70-56 at the final interval.