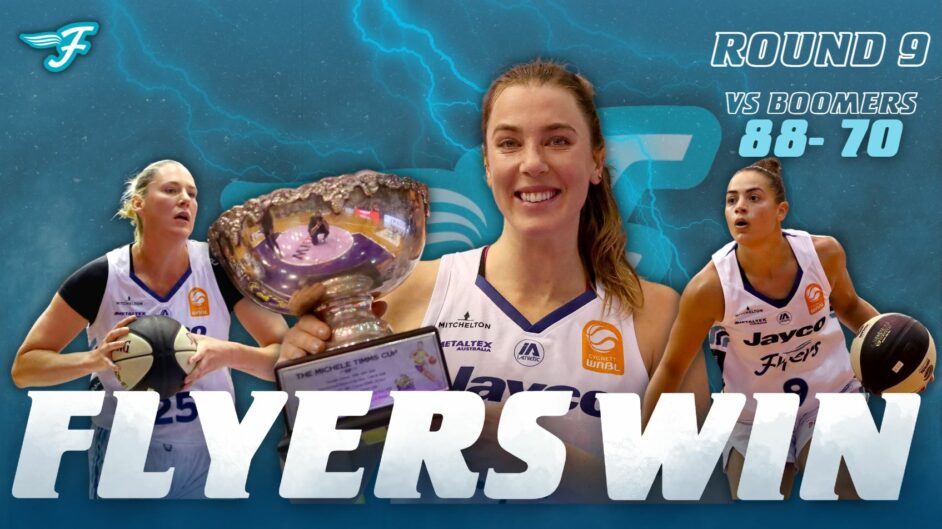 Flyers Blitz the Boomers to start the New Year

Great start to the New Year

After finishing the year strongly, the Flyers started the New Year where they left off with a strong 18-point victory over the Boomers and in doing so secured the Michele Timms Cup for the 2022/23 season.

The first period was a hard-fought affair with the Boomers leading by as much as 6-points early on as they tried to extend their unbeaten streak to nine games. By the end of the first it was the Boomers with a one-point lead, 21-20.

The Flyers Blitz or ‘Blics’ started in the second period when Sara Blicavs started to light up the venue. Her 10th point for the period with one minute remaining put the Flyers 10-points up before going into half time with an 8-point lead, 46-38, having outscored the Boomers 26 to 17 for the period.

The sell-out crowd was expecting a tight game and the Boomers showed in the early part of the third period why they had won their last eight games. The 8-point Flyers lead was reduced to 3-points after a minute and with the teams trading baskets the Flyers had a 3-point lead, 52-55 halfway through the period. Leading by five with three and a half to go, the Flyers went on a 12 to 2 run to close out the period with a 15-point lead, 56-71. Sara continuing her own Blitz with another 10-points in the third period.

Most interest in the final period was on the incredible game by Sara Blicavs who finished with 41-points, including six from six three pointers. She made 15 of 17 shots for the game and also had five rebounds and an assist in 35 minutes of game time.

There is little time for celebrations with the Flyers back in action with a home game on Friday night, January 6, against Bendigo Spirit at the State Basketball Centre. Tip off at 6:30pm. The last chance to see the Flyers in action in Melbourne until February.