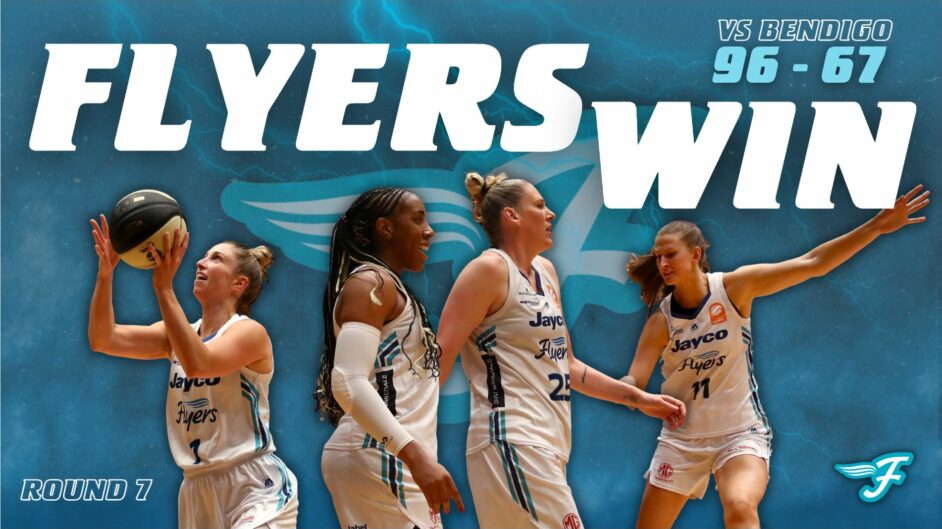 29-point Victory ensures an enjoyable Christmas for the Flyers

The Flyers made their intentions clear from the very start against the previously undefeated Spirit in Bendigo on Friday night, with Maddi Rocci opening the scoring after 16 seconds. A Sara Blicavs three a minute later was the start the Flyers were looking for and when Abby Bishop hit a three late, the Flyers led by 10-points at the end of the first period.

That was as close as the game would get with the Flyers defensive intensity and efficient use of the ball in the front half, ensuring the trend continued and with it a 15-point lead at the main break.

The lead was extended to a game high 30-points after outscoring the Spirit 32-17 in the third period. At the final buzzer the Flyers had earned a 29-point victory (96-67) after being outscored by 1-point (15-16) in the final period.

Six players scored in double figures with Lauren Jackson leading the way with 20-points, along with 13 rebounds. Sara Blicavs had 14-points, 7-rebounds and 5-assists, Carley Ernst 14-points (including 4 from 4 three-pointers), Kayla Thornton (equal game high 5 assists), Abby Bishop and Monique Conti all had 11-points. Maddy Rocci added 9-points, together with 6-rebounds and 4-assists to further highlight the even spread for the Flyers.

Flyers will enjoy Christmas before returning to training on Boxing Day to prepare for the final game of the year, a home game against Canberra on Wednesday December 28 at the State Basketball Centre. Tip off at 5:30pm