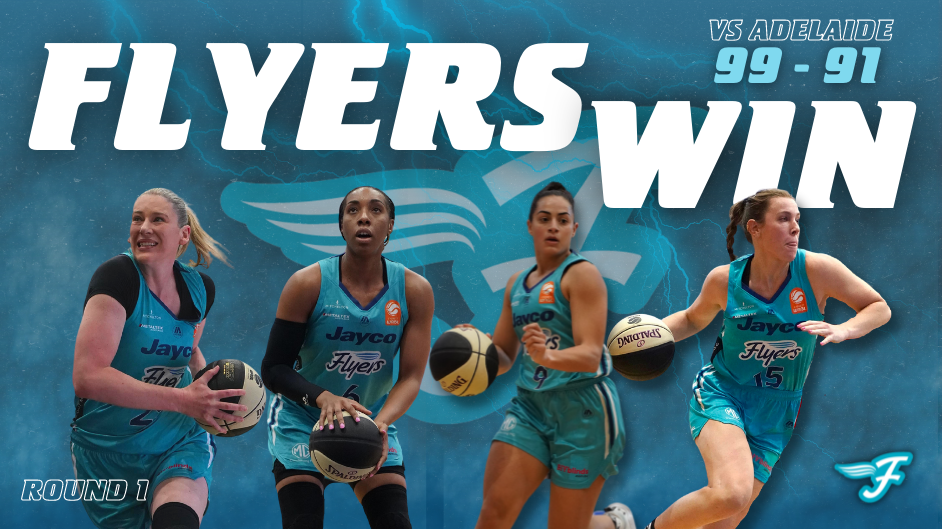 FLYERS OPEN THE SEASON WITH A VICTORY

It was a proper shootout at the State Basketball Centre as Southside Flyers took down Adelaide Lightning 99-91 in the season opener, with Kayla Thornton and Maddy Rocci carrying the scoring load to lead the Flyers to victory.

Thornton was named player of the game, leading the scoring with 21 points on 61.5 percent from the field, and hustled on the glass with eight rebounds. Rocci shot the lights out from deep, putting up 19 points after hitting four out of her seven three point attempts, and finding her teammates with seven assists. For Adelaide, Isabel Borlase top scored with 25 points and only missed two shots.

The Flyers shooting from three (15/30) and their gritty defence were the main catalysts for their first win of the season. While it was a slow start to the game, with no team able to score until a minute and a half into the first quarter, the ball then started dropping for both teams after the seal was broken.

Next Game – vs Boomers on Wednesday night, November 9 at the State Basketball Centre – 6:30pm
Click Here to purchase tickets.

Maddy Rocci set the defensive tone early, giving Adelaide players the full court press from the jump. Kayla Thornton and Rebecca Cole came out hot scoring seven and eight respectively in the first period, including a silky step back three from Thornton. The Flyers were leading almost the whole quarter until Adelaide hit a buzzer beater three to tie the game 25-25 to end the quarter.

Maddy Rocci started the second quarter sizzling, hitting three straight three pointers to maintain a comfortable lead. While for the Lightning, Isabel Borlase scored eight, not missing a shot, to keep her team in striking distance.

Lauren Jackson had multiple close misses, but was able to find some form by getting to the free throw line and eventually added another three to the Flyers tally. Adelaide were displaying good team basketball, finding scoring from cuts to the basket, and ended the quarter seven points down only after Kayla Thornton beat the buzzer for the Flyers with a midrange jumper.

Both teams were trading buckets in the third period, and while Lauren Jackson was not finding the hoop from the field, she continued to get to the line, not missing a single free throw the whole night. Maddy Rocci was the floor general setting her teammates up for easy baskets while maintain scoring of her own, leading to a 10-point margin in the Flyers’ favour at the end of the quarter.

What looked like a potential blowout early in the last quarter, ending up being a nail biter as the Lightning clawed back from a 17-point deficit to get within 3 points. But the Flyers were able to hold on after another timely three from Carley Ernst, some clutch free throws, and a dagger basket from Abby Bishop, displaying her post arsenal with a shimmy to lose her defender. The final score was 99-91, as the Flyers claimed the win in Lauren Jackson’s debut.

Remember all tickets must be pre-purchased and downloaded to your smartphone for entry via digital ticketing.

Membership provides the best seats for all Flyers home games at the State Basketball Centre.