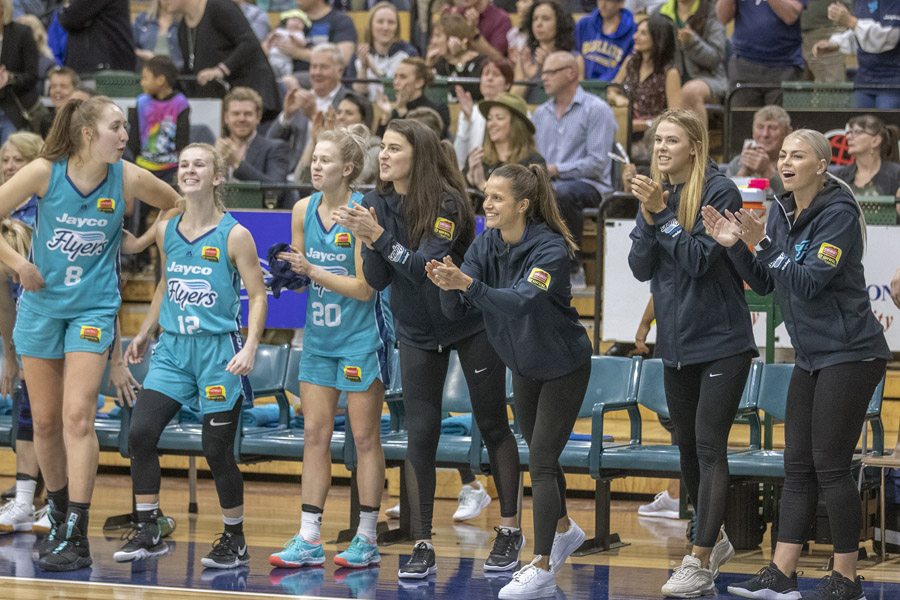 The Jayco Southside Flyers flew out of the blocks and into the history books on Saturday night, winning their first-ever WNBL game.

The league’s newest outfit led the JCU Townsville Fire from start to finish at Dandenong Stadium, recording an 81-72 victory in front of an energetic teal-coloured crowd of 1282.

Flyers coach Cheryl Chambers says it was a night to remember.

“There was a lot of excitement, a lot of nerves, a lot of fun, everyone enjoyed it. We weren’t perfect and there’s a lot of work to do but everyone had a great experience, we were sort of relieved to get the win and now we can move forward and fix a few things.

“The crowd and atmosphere were fantastic. At one stage, the girls said to me ‘we can’t hear what you’re saying’ and that’s a great problem to have.

“The smiles on the kids faces and seeing them all on court getting photos and autographs after the game was fantastic, an awesome atmosphere.”

Mitchell and O’Hea impressed despite unavailability and injury restricting them from the Flyers pre-season games.

“They were super, weren’t they?” said Chambers.

“It does give us some self-belief because on paper you’re talking about a concept before you walk out on the court and I think to get our two experienced players off to a really good start will only help drag everyone else along.”

The Flyers are back into action this Thursday night hosting the Perth Lynx who opened their campaign with a home victory over the Sydney Uni Flames on Sunday.

Then, Southside are headed Sydney side to take on the Flames on Saturday night.

“Focus quickly turns to Round 2 and playing Perth,’’ Chambers explained.

“Then on to Sydney and everyone’s looking forward to getting on the plane, our first trip as a new group, it’ll be a lot of fun.”