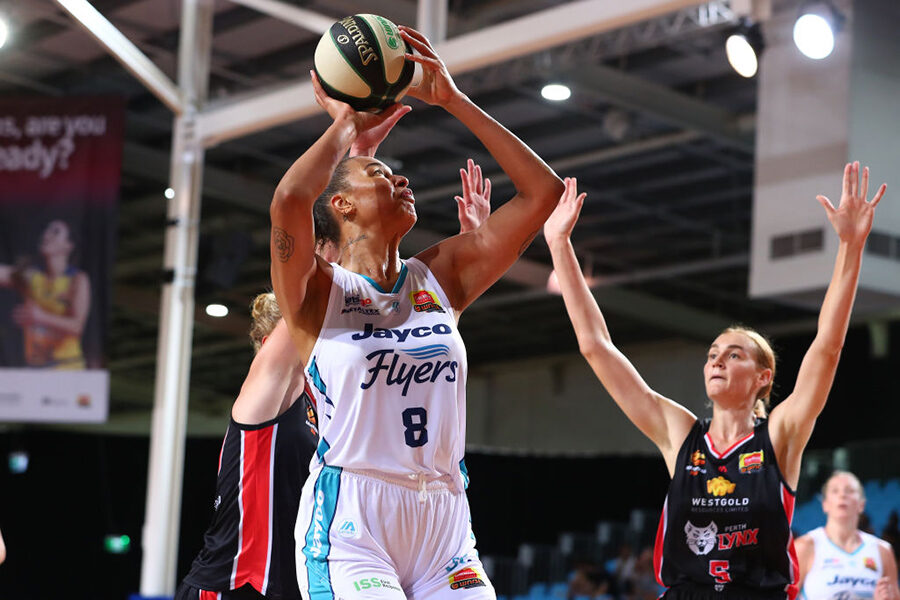 Southside Pour In The Points For Second Big Win Over Perth

For the second time in five days, the Jayco Southside Flyers have put the Perth Lynx to the sword and Leilani Mitchell caught her best form of the 2020 Chemist Warehouse WNBL in the 102-62 win on Wednesday in Cairns.

The Flyers did win big against the Lynx to the tune of 46 points also at the Cairns Pop-up Arena on Saturday, but in between suffered a 23-point loss to the UC Capitals in a Grand Final rematch.

That left Southside hungry to atone but once again it was the youthful Perth without experienced players Kayla Steindl and Alex Ciabattoni who started impressively.

But once the Flyers got going once more, they were impossible to stop making the Lynx pay for their turnovers and showing the firepower once more that they possess.

While Liz Cambage was again impressive with 23 points and eight rebounds and Sara Blicavs delivered again with 10 points and seven rebounds, with Jenna O’Hea adding 10 points, Bec Cole 10, Steph Blicavs nine and Monique Conti nine, it was Leilani Mitchell that was most exciting.

The WNBA and Australian Opals superstar point guard hasn’t quite had the WNBL season she was hoping so far, but that all changed on Wednesday night.

She lit it up with three triples in as many minutes in the second quarter to set the stage for her 20 points on 6/8 shooting from downtown.

Mitchell was happier with the defensive response though.

“We weren’t happy with the way we performed on Monday and we knew that Canberra was a talented team with the experience as the reigning champions,” Mitchell said.

“I don’t think we were ready to play together and we didn’t get everyone involved so that was the focus today. As you see with the scoresheet, it worked but more importantly defensively we helped each other a lot more tonight.”

Southside ended up forcing Perth into 27 turnovers for the night highlighting the absence of Ciabattoni as point guard with the Flyers able to score 31 points from those as they improved to 5-2.

There was plenty for the Lynx to take from the game including the fight they showed in the fourth quarter to not let it be a heavier defeat.

Alex Sharp showed her potential too with 17 points on 3/4 shooting from three-point territory while Jessie Edwards and Ash Isenbarger battled hard to combine for 16 points and 13 rebounds.

Emma Clarke (seven points) and Jewel Williams (five) showed good signs too as Katie Ebzery (nine) sat most of the second half ahead of the Lynx’s clash with the Capitals on Thursday.

“I think we did a lot better than the first game against them,” she said.

“We missed two players and going up against a lot of Australian players, I think we fought pretty hard. The effort was there, and we just kept with it.”

The Lynx started well against the Flyers going up 7-2 when Katie Ebzery nailed a triple. But Southside responded and created 12 turnovers in the first quarter alone for a 12-0 run at one point to lead by double-figures.

The second period was time for Mitchell to take over with the Washington Mystics star hitting three consecutive triples to help the Flyers lead 57-30 by half-time.

Things threatened to get ugly to start the second half with the Flyers scoring the opening seven points with Mitchell again connecting from deep. However, to the credit of the Lynx they did respond though threes of their own to Isenbarger and Sharp.

Perth was able to keep the game at a 35-point gap through the fourth period until Southside ending the game in style with a three-ball from Taylah Giliam.

Chris Pike is a freelance contributor to WNBL.com.au.