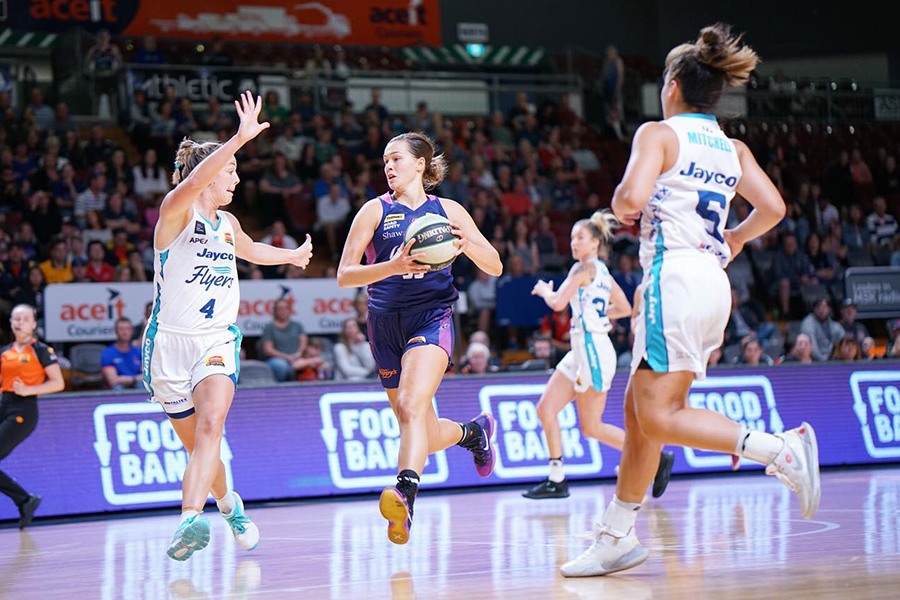 Your Jayco Southside Flyers took on the WNBL’s toughest road trip in the first round of the New Year and returned home with a split weekend.

Round 12 kicked off with a win over the Perth Lynx in Perth on Friday night and ended with a defeat to the Adelaide Lightning on Sunday in a high-scoring affair.

“We’d had a break and the girls had had a break for their injuries on top of that, so we were a bit rusty but it was so nice to have them out there,’’ she said.

“Jenna adds absolute IQ as soon as she steps out on the court and makes others better, it was awesome to have her and Mercedes is so easy going and brings a big presence inside so it was lovely to have them back.”

Following our Round 10 loss on December 21 to the Sydney Uni Flames, the Flyers returned to the #WNBL20 winners list by defeating the Lynx, 90-75.

Two of the Flyers stars returned to the court and had an immediate impact with O’Hea scoring 13 points and 5 boards and Russell (15 points, 11 rebounds) notching yet another double-double.

Bec Cole started 2020 with a bang, sinking a game-high 30 points and point guard Leilani Mitchell added 18 of her own.

On Sunday at Titanium Security Arena in a finals-like-clash between top 4 sides, the Flyers came off second best, falling to the Lightning, 104-93.

The Flyers are State Basketball Centre bound on Sunday afternoon to take on the Melbourne Boomers.

The rivals have met twice already this season with Southside winning on both occasions and claiming the coveted Michele Timms Cup.

“There’s a lot of emotion around Melbourne at the moment with how tough Australia is doing it right now with the bushfires so I think if we can put on a really good game hopefully that provides a little boost,’’ Chambers said.

“It’s really good the rivalry is back. Both teams are at the top of the ladder and it should be a great game with a real finals feel.”

The game will be broadcast live on Fox Sports at 5pm.