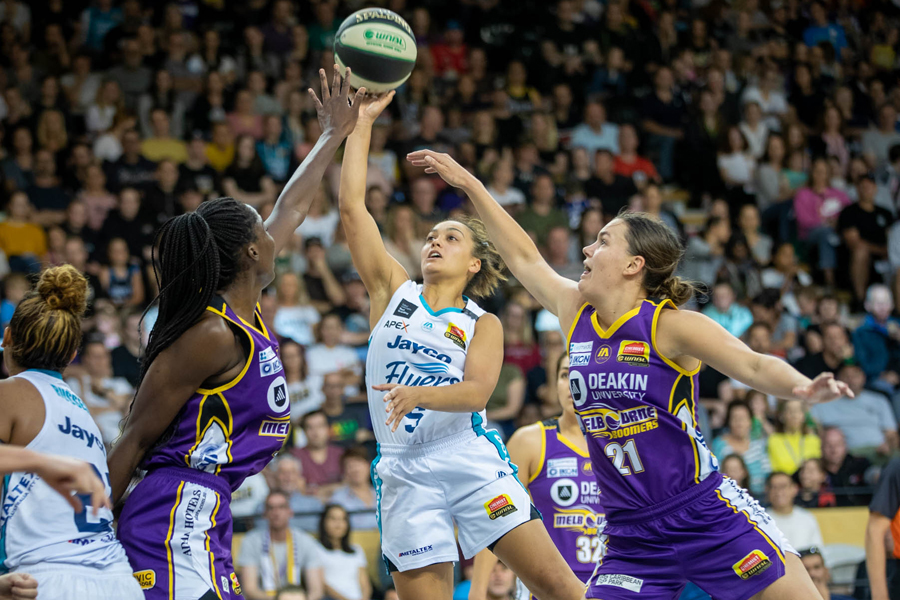 In one of the great games of the Chemist Warehouse #WNBL20 season, your Jayco Southside Flyers soared to new heights against our arch rivals, the Melbourne Boomers.

On Sunday in front of a packed crowd at the State Basketball Centre, the ladder-leading Flyers defeated second-placed Boomers in an overtime thriller, 75-73.

The experienced heads of Leliani Mitchell (21 points, 5 rebounds, 3 assists) and captain Jenna O’Hea (19 points, 6 rebounds, 2 assists) not only topped the stat sheet and made highlight plays, but were also crucial down the stretch.

Enjoying a sensational debut season in the WNBL, Mercedes Russell was engaged in tough battles with Boomers bigs Cayla George and Ezi Magbegor and still conjured an 18-point-11-rebound double double.

Bec Cole teamed her 15 points with 6 assists and 5 boards in a lively display, while Sara Blicavs (9 rebounds) provided some important defensive moments late in the game.

“It was like a final. It was exciting. The crowd was great, we had lots of supporters in the crowd as well. To win in that kind of environment is great experience and I thought out veterans’ Lei and Jenna experience really stood up and helped us in that fourth quarter then overtime,’’ she said.

“Last week (against Adelaide) we were really disappointed with our defence and pressure. On Sunday, our defence most of the time was solid, had we not defended we would have been in all sorts of trouble because offence was difficult for us.”

Your Jayco Southside Flyers (14-3) head up the highway this Saturday night to take on the Bendigo Spirit (4-13).

The Spirit lost 9 games straight before beating Townsville Fire by a point then upsetting the UC Capitals a fortnight ago. They lost to Perth Lynx, 100-81, in Round 13 but have teenage star Shyla Heal in hot form and coming off a career-best 30 points.

We’ll then trek back home for another blockbuster matchup on Sunday, taking on the defending champions, UC Capitals, in what should be a thriller at Dandenong Stadium.

Hopefully this game isn’t as close as our OT victory over the Boomers, we don’t have any nails left to bite after that one!