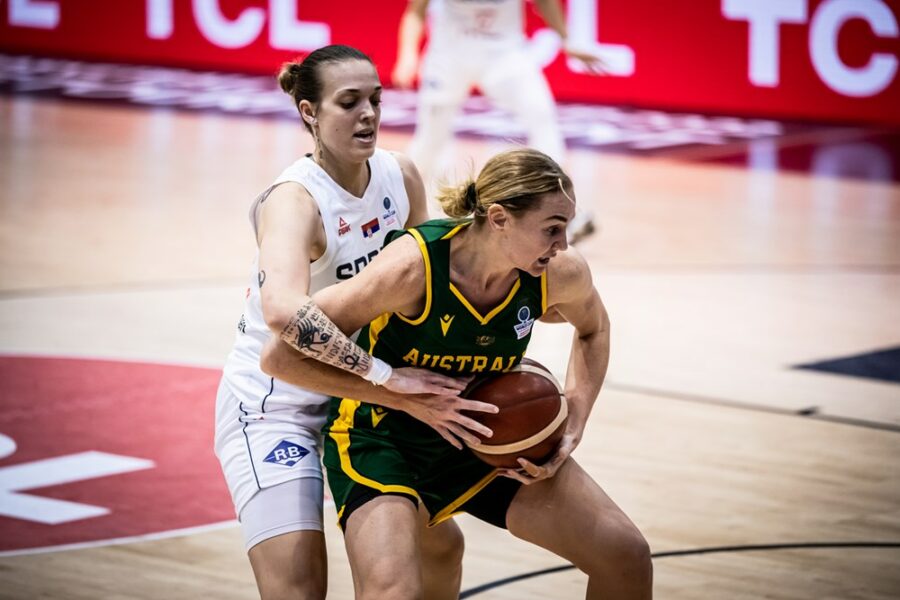 It always loomed as a dramatic game for the Australian Opals in Serbia against the host nation and it certainly proved the case with the Serbians claiming the 78-71 victory in Belgrade.

On the back of opening the FIBA World Cup Qualifying Tournament with a win over Brazil, the Opals were on top most of the way against Serbia even after the ejection of Steph Talbot in the second quarter after an accidental errant elbow on Jovana Nogic in the back court.

However, Perth Lynx pair Sami Whitcomb and Darcee Garbin were instrumental in the Opals being in front for much of the game including still leading 62-57 with just under six minutes in the contest remaining.

Serbia, though, were playing for their lives in terms of qualifying for the FIBA World Cup to be held in Sydney later this year and scored the next 13 points to turn the game on its head and then end up winning by seven.

The intensity from the home crowd certainly helped lift Serbia late and so did their pressure defence with the Opals finishing with 19 turnovers for the game despite shooting an impressive 48 per cent from the field and 39 per cent from beyond the three-point arc.

Captain Sami Whitcomb took on a lot of responsibility as main ball handler and leading scorer for the Opals, but she stepped up impressively for 18 points and six assists on the back of shooting 7/11 from the floor and 3/5 from three-point territory.

Darcee Garbin made a strong contribution as well with seven points and two rebounds.

For Serbia, Yvonne Anderson was the game breaker with 30 points and six rebounds with Aleksandra Crvendakic contributing 12 points and four assists, and Tina Krajisnik 11 points and seven rebounds.

Right from the outset it was obvious Serbia had come to play and the Opals would have their work cut out, not only with the crowd behind the Serbians but also they knew they were playing for the lives for the World Cup in Sydney later this year.

It was Sami Whitcomb part of everything early again for Australia just like in the first game against Brazil, she set up Steph Talbot to score a layup first up and then she scored herself on the next trip down the floor.

A couple of times throughout the opening quarter saw Serbia threaten to breakaway by opening up four-point advantages, but the Opals were able to respond on each occasion even with the host nation leading 24-20 by quarter-time.

Australia made their move during the second period, though, and it started with Darcee Garbin hitting the floor and knocking down the three.

Then when Whitcomb drained a three-point bomb of her own, she put them up five with five minutes to go in the half. The game took a dramatic twist from there, though, with the Opals up 37-32 when Steph Talbot was ejected.

Attempting to bring the ball up the floor, she was called for an offensive foul when her pull through accidentally caught Jovana Nogic on the chin. Almost inexplicably, she was ejected by the officials with just over two minute left in the half.

That did change the whole atmosphere of the game but still Australia was able to cling to a 40-38 lead at half-time.

Whitcomb then scored in the lane early in the third quarter to push the Opals lead back out to six and while Serbia was coming hard, Australia was holding firm including Garbin scoring inside to maintain a 53-51 edge.

The Opals were still on top 56-53 by three quarter-time, but Serbia just couldn’t be denied in the fourth term.

However, Australia was still on top 62-57 when Whitcomb knocked down the three. Serbia took over for the final six minutes, though, with the game changing run of 13 straight points to go from five points down to up by eight on yet another Yvonne Anderson jumper.

From the Serbia held firm to claim the seven-point win to go along way towards booking their World Cup place down under later this year.

The Opals will complete their tournament in Serbia against Korea at 10pm WST on Sunday evening.