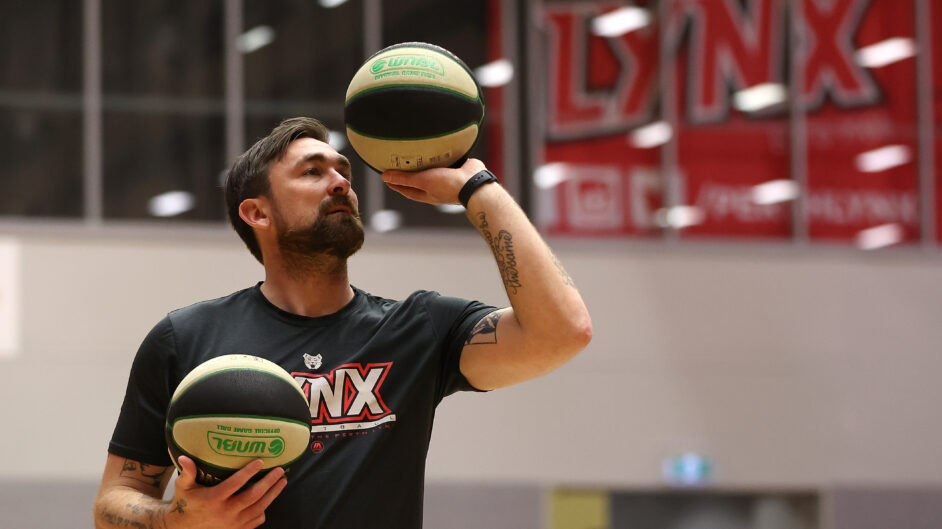 Brad Robbins never does anything by halves as he throws himself full-heartedly into the WNBL coaching world and he’s looking forward to a strong response at home on Saturday night from the Perth Lynx.

How he got to this point

Robbins became one of the key reasons behind the culture being built at the Wildcats more than a decade ago when he went on to become captain after playing in the 2010 NBL championship.

All up, he would play 215 games in the NBL before retiring for good at the end of the 2012/13 season, but it was a lasting legacy he left as one of the best leaders the Wildcats had ever had where his strong character set the tone for the successful era that was to come under Trevor Gleeson.

That’s why Robbins always loomed as a player most naturally set to make the transition from player to coach. He did that initially at the Joondalup Wolves in the Women’s SBL (now NBL1 West) first as assistant coach and then coaching the majority of the 2018 season.

However, the playing bug returned and he came back with the Rockingham Flames alongside now brother-in-law Greg Hire, and with current Lynx coach Ryan Petrik in charge until his body finally told him it was enough and he ruptured an Achilles in 2019.

It’s since then that Robbins has decided that coaching was in is blood and that he wanted to get back involved full-time with basketball. He’s now the development coach at the Willetton Basketball Association, and also in his second season as Petrik’s right-hand man with the Lynx.

In the immediate future, the focus for Robbins and the Lynx is trying to get that first win of the WNBL season this Saturday night against the UC Capitals at Bendat Basketball Centre.

Robbins has been impressed with the work this week on the training court from the team after first up losses to the Melbourne Boomers and Bendigo Spirt.

“It’s never nice obviously starting 0-2 but it’s also important to understand that it’s a long year and it’s not anything to panic about,” Robbins said.

“Obviously we’re disappointed with the first couple of games and it seemed like in both games we kind of had opposite problems. In the first one we could score and couldn’t play defence, and the other one it felt like we couldn’t score but could play a bit of defence. It was a bit of a mismatch.

“The way the girls have responded over the last week has been really interesting just to see them each day grow and evolve into the team that we all want to be. We’ve all kind of sat down and the girls have a good idea of what kind of team we can be, and what that kind of looks like.

“It’s just a matter of putting the pieces together after having a high turnover of players. It will take time for everyone to learn to play with one another and to get that natural feeling of playing the style of game that we want to play, and with girls who potentially they haven’t played with before.”

For the first time in Robbins’ involvement in the WNBL he was able to part of a more normal pre-season preparation with the Lynx to get ready for this campaign.

He enjoyed that process and while all the players were impressive with the work they put in, it was Lauren Scherf and Alex Sharp who especially stood out to him.

“From my point of view the pre-season was awesome just to have everyone for the full period,” Robbins said.

“Obviously we didn’t have Sami for a big chunk of it because of her commitments with the Opals, but we had the rest of the squad together and it just gave people an opportunity to really cement a role for themselves.

“A couple of standouts were Lauren Scherf and Alex Sharp, both girls were just incredible in the off-season. Lauren with her leadership especially in the absence of Sami she directed traffic and we ran the offence through her, and she was huddling girls and her leadership grew.

“You could just see her growing in that role. Then Alex had a fantastic off-season playing with Willetton and then just brought that to the Lynx at another level. She’s just an all-round player and in my opinion she’s arguably our most important player in regards to she really can play in any position we need her to.

“She can hit shots, can play defence or rebound and can do whatever’s required on the night. It was great to see her growth throughout the pre-season and to have the group feel comfortable together overall with the new girls coming in, and learning to grow with one another.”

Getting involved in coaching

It’s fair to say Robbins was burned out on basketball by the time his NBL career came to an end. He had thrown everything into his career not just in what he delivered on the court, but in terms of being such a standout leader who drove that culture within the playing group with all his effort.

He wasn’t sure where his future sat in terms of what was next in life or whether basketball was part of it or not, but then he had the scratch to return having retired from the NBL in 2013 and the SBL in 2015.

He got involved at the Joondalup Wolves with the women’s team under Craig Friday before then coaching the team for most of the 2018 season and that is where he knew that he wanted to throw himself into coaching.

When he went down injured at the Rockingham Flames, he remained on board to help Petrik coaching the team and now the pair have come together with the Lynx as well.

“To be honest it was just opportunity to start with at the Wolves. I thought to myself that I wouldn’t mind dipping my toes in just to see what it felt like because coaching and playing is absolutely just worlds apart,” Robbins said.

“It feels like you can just step into a coach’s role, but you absolutely can’t. You obviously take experience from your playing days but it feels like there’s a whole new learning side to it as well.

“For me it was just about the opportunity to be able to commit to a group especially at a semi-professional level just to see what it was like. Then when the Lynx opportunity presented itself it was just a no-brainer.

“I really enjoyed being on the women’s side and really liked working with the girls and through my experience, I loved the attention to detail from coaching females that they take.

“They want to know why they’re doing things and why they are doing them, and how you want it done and follow those instructions.

“That’s what impressed me about coaching on the women’s side and i thoroughly enjoyed the time at Wolves and then the opportunity presented at Lynx and it was a no-brainer to get back involved at a professional and elite full-time organisation.”

Teaming up with coach Petrik

It was initially with Robbins coming on board as a player again at Rockingham in 2019 where he and Petrik first made their connection, which has now turned into a strong bond between the pair.

Robbins has been so impressed with Petrik’s basketball IQ that he would rate it above any other coach he’s been associated with.

When you think that Robbins played under Guy Molloy, Scott Fisher, Conner Henry and Rob Beveridge, and that’s quite high praise and he has enjoyed the partnership they are forming.

“He was coaching when I went down to play with Greg at Rockingham so I met up with Ryan for a coffee first and instantly thought to myself that this is a dude that I’d like to play for,” Robbins said.

“Then obviously we built up that relationship until I blew my Achilles out and I have a bit of a joke with him that he should have pulled me out of that game a bit earlier. Over the years I’ve built up a really good relationship with him and he’s easily the smartest coach that I’ve come across in regards to X’s and O’s.

“He’s pretty impressive and then it’s learning about how to implement what you see on film or paper into the game, which again is just another side that I hadn’t considered when I first stepped into coaching.

“It was something that was quite different from playing or being a captain at the Wildcats when you’re trying to lead the boys on the floor. It was then completely different stepping into the coaching world and trying to lead from the sidelines.

“He’s really helped me transition from captaining a team and being a leader on the floor to now being able to do it from the sideline.”

Robbins now is in no doubt that working in basketball is the direction he wants his life to head and right now the combination of working with the next generation of players and coaches at Willetton combined with the role with the Lynx is perfect for him.

“When I retired I definitely needed a break and I was mentally exhausted, and just needed time off from the game,” he said.

“It took me quite a while to take that break and find my place in the world post-basketball. Then once I sort of found that I took baby steps to slowly bring myself back to the game and that’s when I sort of entered the coaching world.

“I love it now, it’s addictive and if I’m not coaching at Lynx, I’m working at Willetton and working on the floor with the kids and coaches. And if I’m not doing that, I’m watching the NBA and I’m all in now and really enjoying it. I don’t know what it looks like down the track but coaching is definitely the way forward for me in one form or another.”

Given how inspirational and motivational, but also holding everyone to account that Robbins proved to be as a captain of the Wildcats, coaching always felt it would be a natural move for him.

He appears to have everything it takes to be a head coach at whatever level and in whatever league he chooses one day, but he won’t put his hand up for a role until he feels ready.

“While I’m doing this I’m just focusing on this and I’ve got two hats I’m wearing as a development coach at Willetton working with young kids and aspiring coaches, which I love doing, and then on the other hand I’m an assistant coach in an elite program,” Robbins said.

“For the moment that’s all I’m really focusing on and the only way I would put up my hand for a head coaching role is if I was ready for it. If and when that time was to come, I would reassess then, but I wouldn’t do it until I’m ready for it and I feel like I need to do a bit more of an apprenticeship before I would put my hand up for something like that.”