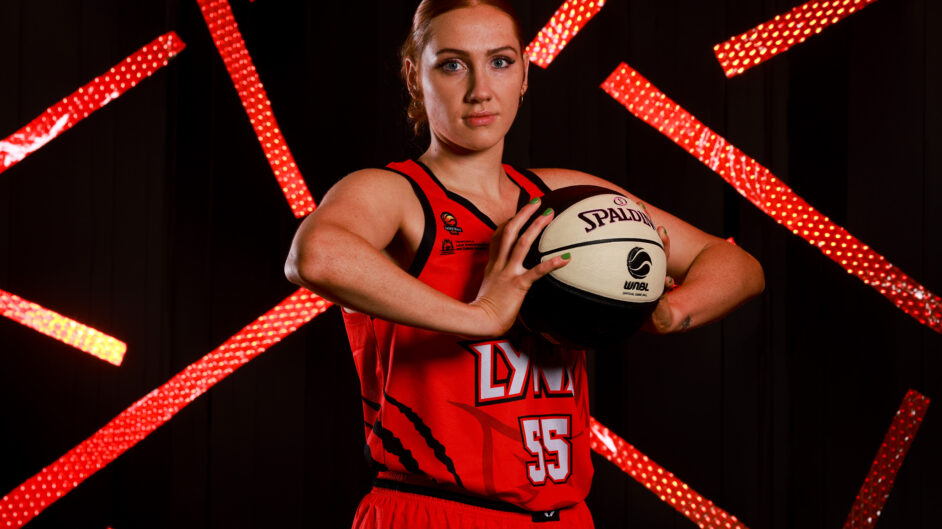 Chloe Bibby hasn’t made her Perth Lynx debut yet on return to the WNBL after a college experience she describes as phenomenal, but already she is loving life out west and can tell she’s going to love the experience on-court too.

All Lynx coach Ryan Petrik had to say when he first spoke to Bibby about joining the Lynx for the 2022/23 WNBL season was that he was willing to back her in to play a key role, and that she would have the green light to shoot the three ball.

Throw in the fact that Bibby has family in Perth and that she was set on a return to the WNBL after her time at college where she earned two degrees and spent two years each at Mississippi State and Maryland, and Bibby didn’t have to be asked twice to join the Lynx.

Now less than a week before the season-opener against the Melbourne Boomers at Bendat Basketball Centre, and the 24-year-old sharpshooting forward is beaming about what her time at the Lynx has already been like.

“I’m really excited to be here and for the season to start. I love Perth, I have got family over here and I’ve been here for about a month now, but I am just having the best time. It’s been great,” Bibby said.

“The people are just so nice, the club and everyone has been phenomenal in helping me get everything started or situated or whatever. I’m just having a blast and we haven’t even played a game yet.”

She might only be 24 now, but that experience does feel like a lifetime ago in a lot of ways and she knows she’s returning to a very different WNBL this time around, but she’s delighted to be doing it at the Lynx.

“It does feel like a very long time ago and it does make me feel a bit old because it has been quite a while since I last played WNBL, but I’m really excited just to be back here and playing against such great competition,” Bibby said.

“I spoke to Ryan and I realised how passionate he was about the club and I love his philosophy, and he loves his teams to shoot threes and that’s what I love to do.

“Then the other aspect is that I have family over here and after being away for so long, I just think it was a great opportunity to be home and play in a great league. I just couldn’t pass it up.”

Now that the six weeks of pre-season training is done for the Lynx and they are focused on Round 1 starting at home on Wednesday night, Bibby just can’t wait to get into games and is excited about the team she is going to be part of.

“It’s been great and we’ve had people coming in and just having everyone together to build that chemistry has been great. We’re a really young team but I think that just makes us more competitive and more hungry.

“We want to play for each other and we want to do as best we can. Everyone is just grinding and it’s been great, we want each other succeed and we’re not one of those teams where we are competitive with each other.

“This team honestly just wants each other to do the best we can because we know that will be great for or team. Everyone has been just phenomenal by working so hard and encouraging each other. Even though we are young I think we can really ruffle some feathers this season.”

With the quality and experience of Sami Whitcomb in the back court and Lauren Scherf up front, and then a largely youthful, energetic and talented group around them led by Bibby, she’s excited for the potential this team has.

“I think we just have so much potential and we just love playing with each other, and for one another,” she said.

“I think that’s really going to set us apart from other teams even though we are young. We want to learn and we just want to win, and we are that competitive in training and practice.

“I think that’s going to end up translating to the games as well. We’ve got that many weapons not only in the paint but behind the three-point line. It’s really exciting because everyone can shoot the three and do a bit of everything so it’s very exciting.”

Another bonus of coming to the Lynx for Bibby is getting the chance to not only be a teammate of WNBA champion and World Cup bronze medallist Sami Whitcomb, but to also learn off her away from the court with how to become the ultimate professional.

“She is elite in everything that she does so to have her back in training now after a well-deserved rest that she definitely deserved,” Bibby said.

“It’s good to have her in the fold now and just to see how she practices every day and the level she not only holds herself to, but everyone around her.

“It just makes everyone better and by seeing her practice every day you see what it takes it to get the level that she’s at. I know that her experience and knowledge of the game and everything will just make us that much better.”

Not only did Bibby love everything about the basketball experience in college firstly with the Mississippi State Bulldogs and then the Maryland Terrapins, she’s just as proud of the two degrees she came away with too and the life experience.

“It was a phenomenal experience. I wouldn’t change it for the world and I’m so happy that I did it,” she said.

“With the schools I went to, I was very blessed to have a great experience and I got two degrees out of it which I couldn’t be prouder about.

“I had the best time and the level of competition over there was phenomenal, and they were just perfect environments for me to be able to get those degrees and also play basketball.”

Speaking of those degrees, Bibby hopes they hold her in good stead to move into working in the management and fan engagement side of sport down the track. However, at 24, she hopes that’s not for a while yet as she makes the most of life as a professional basketballer.

“I got my bachelor’s in marketing and master’s in business and management. With those I would really like to go into fan engagement with a sporting team, and just the ins and outs of working with game day experience for fans,” Bibby said.

“I would really like to do that and I like the marketing aspect of it too, but that’s eventually and I would still like to stay in sport. Before that, I’d like to play basketball for as long as I can and we’ll see how that goes.”